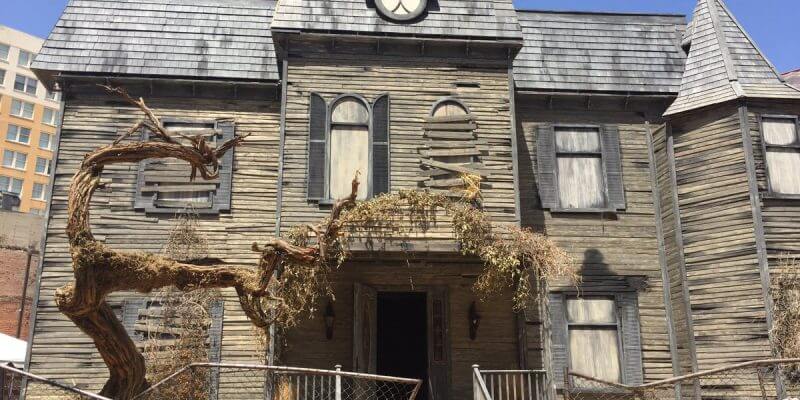 One month ago we first stepped through the doors of the dilapidated Neibolt House at The IT Experience in the middle of Hollywood, California. The walk-through event promoting the now-smash-hit new film “IT” (based on the Stephen King novel of the same name) was impressively designed and drew long lines of horror fans throughout its run at the corner of Hollywood and Vine.

Now the nearby Warner Bros Studio Tour— located just over the hill in Burbank– will welcome the three-story Neibolt House to its “Horror Made Here” Halloween event for six nights only at the end of October.

WATCH “THE IT EXPERIENCE” IN HOLLYWOOD:

During “Horror Made Here,” the Warner Bros. backlot will be transformed into a “festival of frights,” welcoming guests into creepy re-creations of some of the most memorable moments from horror history. Attendees can expect to meet Freddy Krueger from “A Nightmare on Elm Street,” see the haunted items from the Warrens’ collection in “The Conjuring” movies, and explore the Radley Sanitarium from the TV series “Pretty Little Liars.”

Each evening at the event will also include “Halloween-themed activities, music, food trucks, chilling interactive dark walkthroughs, exclusive nighttime tours and a chance to ‘float’ in the ITVR experience.” “The Warner Bros. Studio Tour: Horror Made Here” takes place October 19th, 20th, 21st, 26th, 27th, and 28th at the Warner Bros. lot in Burbank, California. Be sure to visit the tour’s official website for more information and for advance ticketing resources.

Comments Off on “IT” Neibolt House experience moving to Warner Bros. Studio Tour for “Horror Made Here” Halloween event