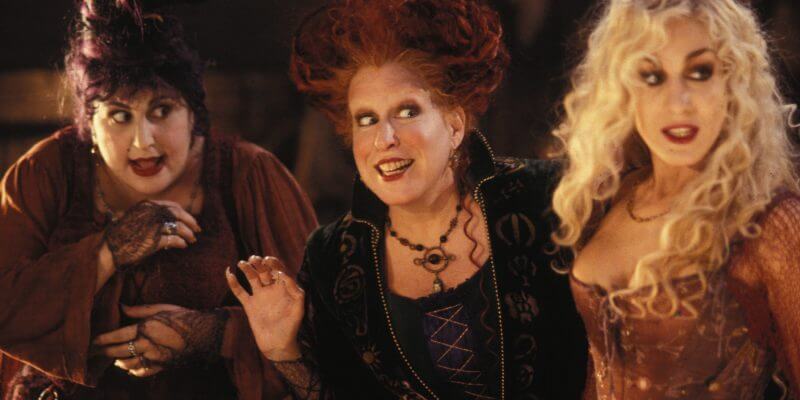 Could a sequel to “Hocus Pocus” be on its way from Disney? The 1993 film’s original screenwriter seems to think so.

According to Deadline Hollywood, the new “Hocus Pocus” movie is being developed without the original cast. New writer Scarlett Lacey (“The Royals”) and producer of the original film David Kirschner (who also contributed to “An Americal Tail” and “The Pagemaster”) have been tasked with revitalizing the franchise, without director Kenny Ortega, who has since moved on to the “High School Musical” and “Descendants” movies.

I seem to remember Disney’s Halloween-themed family comedy flying pretty far under the radar when it was first released, but I was 13 years old at the time and way more into seeing “Jurassic Park” a dozen times in the theater that summer. Either way, “Hocus Pocus” has definitely blossomed into a cult phenomenon, especially for kids of the 90s generation.

Now, after the success of the recently-added “Hocus Pocus Villain Spelltacular” live show during Mickey’s Not-So-Scary Halloween Party at Walt Disney World and some cool new merchandise (both official and unofficial), the world seems primed for a larger “Hocus Pocus” revival of some kind.

This week in an interview with Forbes magazine, “Hocus Pocus” screenwriter Mick Garris addressed the possibility of a follow-up to the horror fantasy about a trio of witchy sisters in Salem, Massachusetts.

“There have been rumors of a ‘Hocus Pocus’ sequel for the last 10 years that will not die. I have heard they are developing the script, I haven’t been involved in it but I think there will be a sequel it might be for Disney Channel or Freeform or ABC. I think it will be for television, but I hear that it is moving ahead.”

As to whether the first films three stars Better Midler, Sarah Jessica Parker, and Kathy Najimy would return to their roles as Winifred, Sarah, and Mary Sanderson, Garris had this to say: “I think they are, yeah, I think they are. If they don’t do that I think it would be a big mistake because all three of them are still so incredibly potent and powerful and great performers and who else can recreate those characters?” While this news is far from official confirmation by Disney, it wouldn’t surprise me at all to learn that the House of Mouse has been secretly cooking up a sequel to one of their more enduring early-90s live-action theatrical efforts, especially considering how many other properties from that era have been resuscitated lately.

Disney’s “Hocus Pocus” is currently available on DVD for just $4.99 from Amazon.com.