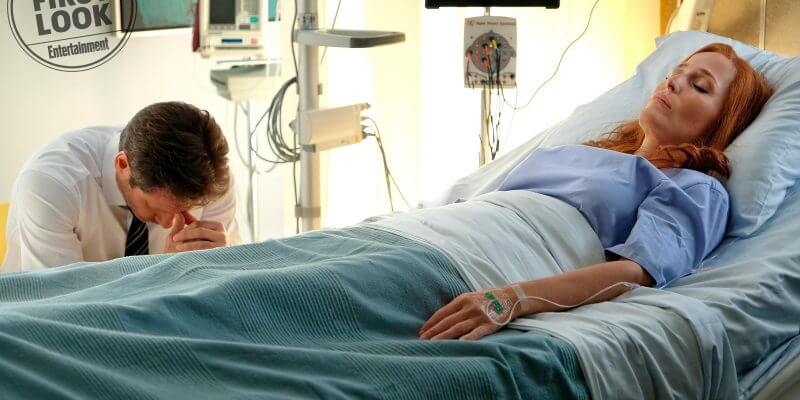 After being reopened last year, The X-Files is returning with more aliens, conspiracy, and danger for Mulder and Scully.

New images from the upcoming 11th season, courtesy of Entertainment Weekly, reveal a life-threatening situation for Scully when the series returns. During last season’s cliffhanger finale, Scully, immune to the alien virus sweeping the world, rushed to save a very ill Mulder. Now, those roles appear reversed as Scully lies in a hospital bed and Mulder does some of his trademark worrying at her side (see also season 5’s “Redux II” for some great drama). Those disappointed by Mulder and Scully’s apparent estrangement during season 10 may be happier during the upcoming season. According to EW, Mulder and Scully will be drawn even closer together this year, and loyal shippers “have something to look forward to,” Carter says.

Mulder and Scully’s son William, whose absence hovered over last season, continues to be a significant presence in the agents’ lives. “William has been an absent center,” Carter says. “He will come to the fore.”

Like last season, new episodes are a mix of mythology and stand-alone “monster-of-the week” stories. Episode one explores the Cigarette Smoking Man’s (William B. Davis) connections to Mulder’s family, while the second episode opens after a time jump. Episode three, written by Carter, touches on a familiar X-Files theme: doubles and doppelgängers.

Barbara Hershey joins the cast a mysterious, powerful figure who also happens to have red hair like Scully, though Carter insists that’s a coincidence.

Carter also teased new character Mr. Y, and other characters who only appear to be new.