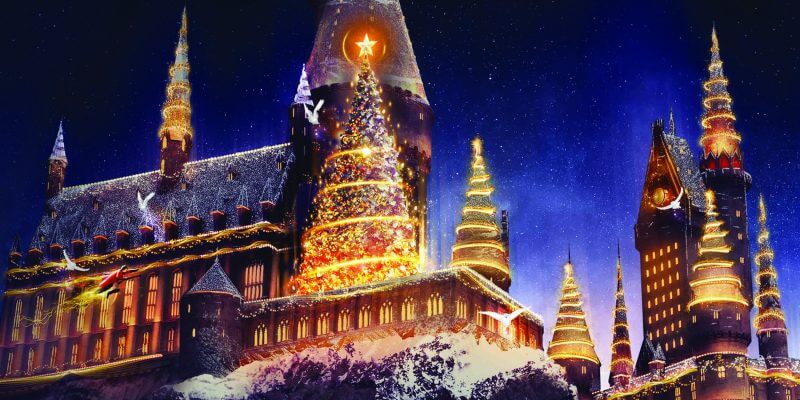 Order up some hot Butterbeer and deck the Great Hall at Hogwarts, because Christmas is coming to the Wizarding World of Harry Potter at Universal Studios Hollywood!

Though the magical holiday celebration was previously announced back in June, today Universal revealed the finalized dates and full details for the most wonderful time of year in “the Entertainment Capital of L.A.”

From November 24, 2017 through January 7, 2018, guests can enjoy bright Yuletide decor throughout the storefronts of Hogsmeade Village and a “dazzling light projection spectacular” entitled “The Magic of Christmas at Hogwarts Castle” on the centerpiece structure of the Wizarding World.

All-new holiday-themed songs will be performed by the Frog Choir on the Wizarding World’s performance stage, and special Christmastime foods will be available at the Three Broomsticks restaurant and other carts around the area inspired by J.K. Rowling’s “Harry Potter” novel series and its movie adaptations.

Fans will also be able to purchase all-new custom-made ‘Harry Potter’ Christmas merchandise, including “decorative Hogwarts Castle snow globes, Hogwarts crest and mascot ornaments representing each of the houses, as well as a collection of unique tree toppers and house pennant garland.”


In addition to Christmas at the Wizarding World of Harry Potter, Universal Studios Hollywood will feature the return of the popular Grinchmas Who-bilation on December 2-3 and 9-10, then daily from December 15 through December 31, 2017. The Universal CityWalk shopping district just outside the park gates will also be transformed into a winter wonderland for the holiday season.

For more information on Universal Studios Hollywood’s Festive Holiday Season, be sure to visit the park’s official website.

Comments Off on Christmas in the Wizarding World of Harry Potter dates announced, full details revealed for Universal Studios Hollywood