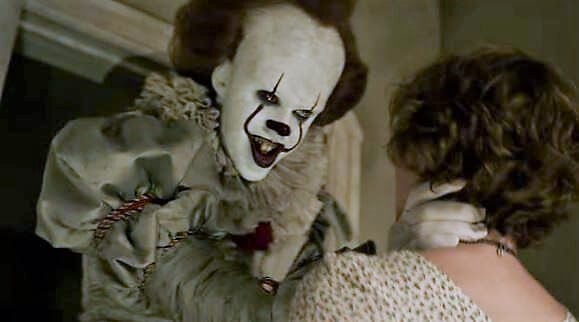 Universal Studios’ Halloween Horror Nights is the ultimate showcase of this macabre and monstrous mania.  Almost thirty years of fears from the fall event fed our nightmares and drove our desire to be spooked.  While my personal favorites of the annual autumn amazement known as HHN, is the original horrors dreamed up by the theme park’s creative teams, lately the intellectual properties (IPs) have cast their clever creepy claws upon my dark heart.  This year’s “The Shining” and “Ash vs the Evil Dead” mazes immediately come to mind.

Thus, the thought of what other IPs would make a good fit for the king of Halloween events?  I’ve done some digging into the cobwebbed recesses of what passes for my disturbed mind and have unearthed a few spooktacular suggestions I enjoyed the first vision of Stephen King’s novel when was released.  Now a new nightmare has emerged and is spectacularly slashing the box office records with a darker, edgier existence.  And what a wickedly wonderful IP addition to HHN this monster movie would make!  I can just see the sewer tunnel now, begging for victims, I mean visitors.  Want an idea of what that might look like? Check out this VR experience from the film.

2. “The Hunchback of Notre Dame”

While the animated version released by the Walt Disney Company might be frightening in a different way, this classic Universal Monster movie monster and story could make a ghoulishly great Gothic adventure.  As a HUGE fan of the early, ORIGINAL, Universal Classic Monsters, this would be one maze I would not want to miss.

Haunts with humor have been a boo blast.  Funny and fear work well together; just think of the 2012 H.R. Blood’n Gutz house from 2012. While not as gory, “the Munsters” could bring some spooky silliness to a new IP maze.  Bonus bring in the vehicles from the 1960s Universal TV show and maybe even an appearance or two by Butch Patrick?

Halloween Horror Nights has seen video game IPs come to un-life in the past.  BioShock’s creepy, surreal worlds would make a creepy cool computer game homage as a haunted maze or even a scare zone.  Would just die to see HHN create a working Big Daddy!  There’s ten years of material to work with for this IP.

We’ve seen post-apocalyptic ambiance in the streets as scar zones for Halloween Horror Nights in the past.  The textures and various eerie environments alone lend themselves to thermo-nuclear theming for either a scare zone or haunt (or both?!).  Add in several of the monsters and bosses and the makings of an exciting IP experience emerge.

The Simpsons special is tradition older than Halloween Horror Nights and is must-have addition for event, especially at Orlando with its Simpsons themed area.  It would not take much (well, except for a top notch legal team to work out the deal) to bring the long-running Halloween spoof special to the existing Simpsons ride in the park.  If cost is a concern, I’m sure fans of the show and special wouldn’t mind a small upcharge for the opportunity to zoom through the mayhem.

This NBC/Universal television series was a frightfully fun take on the Brothers Grimm universe.  The show ended last year.  It would be nice to see Nick (a Grimm) and company return to fight the monsters (known as Wesen).  Bringing  the monsters and creatures from Portland to Horror Nights for a special Halloween “episode” of the show would be a nice fit for HHN, especially since this is already a Universal property.

Comments Off on Which of These 13 Thrilling IPs Do You Want to See at Halloween Horror Nights?