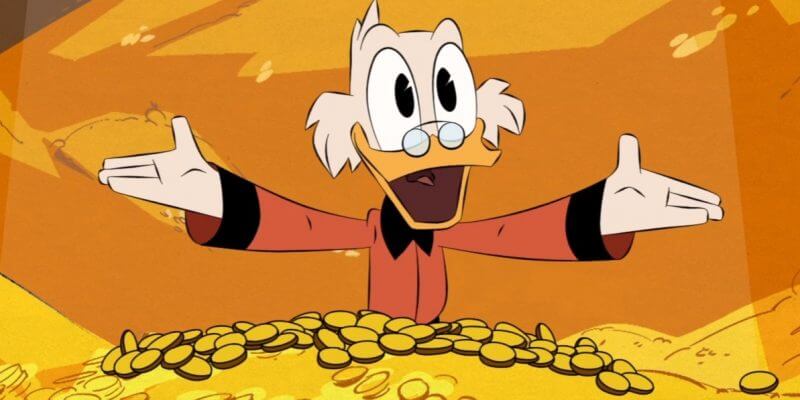 The new “DuckTales” reboot made its debut this past weekend on Disney XD, and I personally thought it was pretty terrific.

I also noticed a bunch of Easter Egg references to the 1980s “DuckTales” TV series, the Carl Barks comics that inspired it, and even other Disney properties. So let’s take a look at this new pilot episode and see what hidden gems we can find with Scrooge McDuck and the gang. Number 4 – Scrooge McDuck creator Carl Barks received a number of tributes in the art on the Scrooge’s walls during the episode, recreating some of the cartoonist’s most famous depictions of the richest duck in the world. Number 5 – Webigail Vanderquack: the new, more take-charge iteration of the character has pinned a doll with her former look on the wall of her room (the same doll the character carried around in the old series). Number 6 – Webby’s big board – this one scene is jam-packed with Easter Eggs for fans of Disney’s duck family, including references to Donald’s cousin Gladstone Gander, the Scottish McDuck clan and their home of Dismal Downs, and even a mysterious formula that seems to combine the year DuckTales first premiered, the average length of an episode, and the number 1400. What significance does 1400 hold? Hopefully we’ll find out eventually. Number 7 – In one scene Uncle Scrooge declares himself “tougher than the toughies and smarter than the smarties,” a line the character has used in both the original comics and the first “DuckTales” TV show. Number 8 through 11  – The Wing of Secrets is another treasure trove of hidden “DuckTales” references: there’s the titular lamp from “DuckTales the Movie: Treasure of the Lost Lamp,” Bubba the Cave Duck (or one of his relatives), Armstrong the robot built by Gyro Gearloose, and a giant Golden Sun coin from the five-part premiere episode of the 80s show. And finally, Number 12 – This might be the most obscure reference of them all: The Gong of Piscou, named after the French magazine that features the adventures of Scrooge McDuck and family. Believe it or not, all of that was crammed into the first half of the hour-long premiere episode of the new “DuckTales”—did you pick up any others? Let us know!