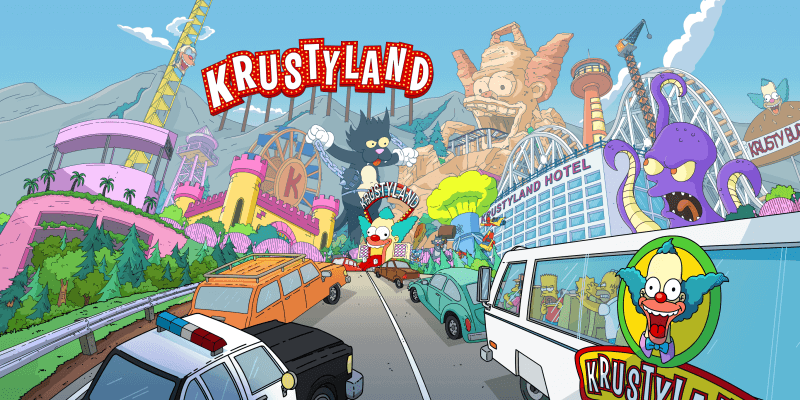 Hard-core theme park fans tend to appreciate nods to their passion wherever they encounter them, so it’s always nice when a piece of popular culture incorporates the American theme park phenomenon into its storytelling. Whether it’s in movies, books, video games, or television, when these references pop up (especially if they contain some sort of clever in-joke) it can make that particular morsel of entertainment feel as though it was directed squarely at us, the theme park fan community.

That’s why I’ve always loved when television sitcoms have episodes set in fictional theme parks. It’s the perfect setting to poke fun at some of the most famous (and most prime for parody) aspects of our obsession, while simultaneously conveying the writers’ interest in and admiration for the world of theme parks as well.

With that in mind, I’ve compiled a list of my five favorite theme park episodes from contemporary sitcoms, both animated and live-action. Let’s take a look… It should go without saying by now that the first decade of “The Simpsons” is the crowning achievement of the sitcom formula, so it makes sense that the theme park-focused episode from this era would be among the very best examples in this category.

In “Itchy & Scratchy Land,” the Simpsons take a family vacation to an island-based park inspired by Bart (Nancy Cartwright) and Lisa’s (Yeardley Smith) favorite ultraviolent cat-and-mouse cartoon. Serving as a brilliant homage to Michael Crichton’s “Westworld” and his later-period “Jurassic Park,” the animatronic robots populating Itchy & Scratchy Land go berserk and it’s up to our favorite dysfunctional clan to find a way to shut them down and escape before too much damage gets caused and somebody gets hurt.

Later in the series (and in The Simpsons Ride at Universal Studios) Itchy & Scratchy Land would be replaced by the Springfield-located Krustyland, but the first theme park featured on “The Simpsons” will always be the most fondly remembered. The episode includes numerous direct allusions to Disneyland, most notably concerning “Itchy & Scratchy” creator Roger Meyers, Sr., whose entire existence on the show functions as a biting satire of Walt Disney himself. Chris Elliott’s cult-hit absurdist comedy “Get a Life” ran on FOX for two seasons in the early 90s, and boasted some first-class writing talent like “Being John Malkovich” screenwriter Charlie Kaufman and “Better Call Saul” star Bob Odenkirk. Naturally, the pilot episode for this underrated and under-seen sitcom involves Elliott’s psychotic man-child protagonist Chris Peterson getting stuck upside-down on a roller coaster with his best friend for most of the half hour.

In “Terror on the Hell Loop 2000,” Chris talks his buddy Larry (Sam Robards) into skipping work to attend the FunLand amusement park and hop on board the “first 360-degree super roller coaster in Minnesota.” Unfortunately for the two friends, the new ride breaks down on their sixth time through the big loop, and their lives are left in the hands of indifferent park attendants and ratings-obsessed local media.

As crazy as it sounds, this was far from the most ridiculous thing to take place on “Get a Life,” a show where the main character once almost drowned in a mini-submarine he built in his own shower.

WATCH “GET A LIFE” PILOT EPISODE: Eric Cartman of “South Park” is one of the most despicably evil (and hilariously funny) characters in TV history, and he is perhaps most famous for being completely self-centered. True to his sociopathic form, Cartman dreams of owning his own theme park just so he can keep everyone else out and go on all the rides by himself without any people forming lines in front of him.

In the show’s fifth season, Cartman’s dreams come true when he inherits one million dollars from his recently-deceased grandmother and he immediately uses it to purchase the failing North Park Funland. He then closes the gates to all visitors other than himself, until he realizes he must pay for maintenance and security. Through a series of painful lessons in supply-and-demand economics, Eric accidentally turns Cartmanland into a thriving success, much to his own chagrin.

Throughout the twenty existing seasons of “South Park,” Cartman (voiced by series co-creator Trey Parker) has repeatedly reinforced his love of themed entertainment, embodied by his unbridled enthusiasm for Denver’s Casa Bonita (the Disneyland of Mexican restaurants) and that time he smuggled all of Disneyland itself into prison using… well, you’ll have to watch the show to find out.

4 – Dinosaurs – “Variations on a Theme Park” The Jim Henson-conceived “Dinosaurs” television series aired on the ABC Network for four seasons in the 90s, and was praised for its sophisticated animatronic characters and for having a surprisingly subversive sense of humor for what was ostensibly a show aimed at children.

One of the “lost episodes” that was never shown during the series’ original run concerned the Sinclair family of anthropomorphic dinosaurs attending the Wesaysoland theme park, owned by the tyrannical corporation for which Earl (Stuart Pankin) works. In typically cynical fashion for “Dinosaurs,” the Wesaysoland mascot is named Moola the Cash Cow, the lines at the park are absurdly long, and almost everything is still under construction.

Ultimately the Sinclairs decide a better way to spend their 14-day vacation package is to stay in their hotel room and bond as a family. It’s a startlingly caustic take on theme parks, especially considering “Dinosaurs” was produced by Walt Disney Television. Justin Roiland and Dan Harmon’s sci-fi adventure sitcom “Rick and Morty” is currently in the middle of its third season on Cartoon Network’s Adult Swim programming block, and though the acclaimed and popular show is still relatively new, it has already featured its very own instant-classic theme park episode.

In “Anatomy Park” the titular alcoholic scientific genius Rick Sanchez (voiced by Roiland) follows through on his probably-misguided plan to create a miniature theme park in the body of an elderly homeless man. As you can guess, things fall apart pretty quickly when Rick’s hapless grandson Morty (also Roiland) gets shrunk down and injected into another tribute to “Jurassic Park.” Along the way Morty meets the John Hammond-esque amoeba named Dr. Xenon Bloom (played by comedian John Oliver) and battles his own T-Rex in the form of the disease Hepatitis C.

Disneyland references in this “Rick and Morty” episode include Rick’s favorite attraction Pirates of the Pancreas (which is intentionally designed as less politically correct than its real-world counterpart) and It’s a Small, Small Intestine.


Obviously it’s a little easier to do a theme park episode on an animated series, considering the extreme cost restrictions of building large-scale live-action sets, so cartoon sitcoms are the most common examples of this trend. But no matter the medium, it’s always fun (and frequently very funny) to see theme parks parodied on the small screen.