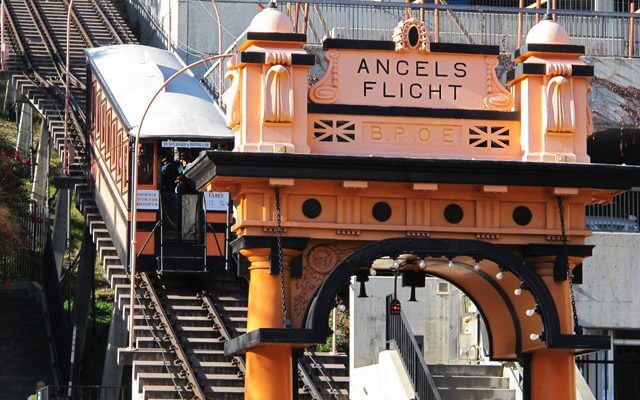 After four years of renovations, the Los Angeles Times reports one of the world’s shortest railway is set to open again this week.

Angels Flight in Los Angeles is a historic funicular that first opened in 1901. Billed as a tourist novelty, it was often used by local workers traveling to jobs in downtown L.A. However, it closed in the 1960s and the two cars, Sinai and Olivet, spent 27 years in storage. In 1996, Angels Flight opened once again and operated between Hill Street and Olive Street, just a half block from its original location.

After a fatal accident in 2001 and a derailment in 2013, the 112-year old Angels Flight was closed for a $5-million safety upgrade. Updated safety features, new motors, a new evacuation staircase, and fresh orange paint for Sinai and Olivet were included in the upgrades. The grand opening this weekend will be the first time Angels Flight has shuttled passengers since 2013, except for one secret ride taken by Emma Stone and Ryan Gosling during the filming of “La La Land.” Angels Flight reopens on Thursday, August 31. The railway operates from 6:45AM – 10:00PM seven days a week. The Top Station is located at 350 South Grand Avenue, while the Lower Station is at 351 South Hill Street.

Comments Off on Take a 50-second ride on tiny railway Angels Flight, reopening in Los Angeles this weekend