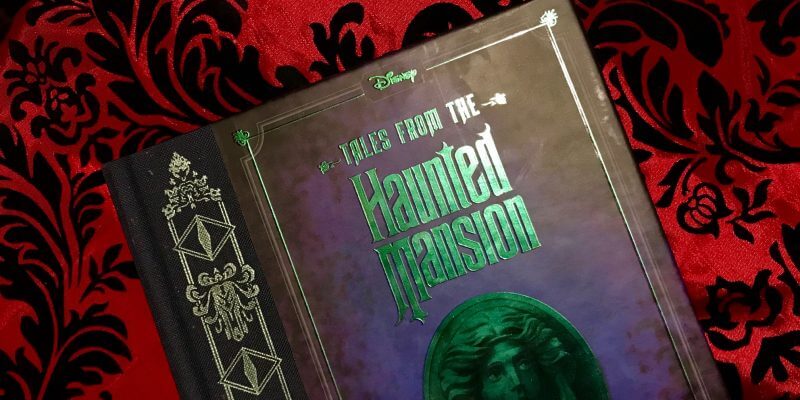 A hurried walk to the mailbox on Tuesday had this ghost ginning greatly as the newest addition to the “Tales from Haunted Mansion” series managed to find a way out (from Amazon) to haunt my home.  In this eagerly anticipated volume, Amicus Arcane, librarian to the Haunted Mansion (with the help of transcription by John Esposito and illustrations by Kelley Jones), pulls back the veil to the other side once again . . .

Two hundred and forty  perilous pages and twelve chilling chapters later, “Midnight at Madame Leota’s” delightful doombuggy ride of spooky smiles and dark delights had been deliciously devoured.  What follows (you home) is this spoiler free review of “Tales from the Haunted Mansion Volume II.” The Haunted Mansion’s resident librarian, Amicus Arcane, has returned with another set of spooky stories to share. Follow along with him as he tells new terrifying tales while leading the Mansion’s newest visitor to a secret séance with the mysterious Madame Leota. –Amazon “Midnight at Madame Leota’s” is the second installment in Disney’s Haunted Mansion anthology novels.  The first volume brought us the tales of fearsome foursome wrapped up in Haunted Mansion related references as told by the manor’s own librarian Amicus Arcane.

Volume two brings four more tales of terror filled with thrills, chills interwoven with mansion lore and references.  Fans will be delighted with the fiendishly fun gags and allusions to the mighty mansion are just to die for.  Librarian Amicus Arcane seems to find his spooky stride with the asides and interweaving of tales. Much to my macabre amazement, surprising stories of some of the silly spooks and recognizable relics from the Haunted Mansion materialized much more often in this paranormal performance by our host/librarian.  These brilliant bones tossed out to the fans included more than a few favored familiar fading (in and out) faces and even allusions toward another attraction or two.

Four fear-filled fictions at unrest in X enjoyed a spirited sophistication superior to its predecessor.  Darker tales and playfully spirited scenes came out to socialize in spectacular style as they waltzed well together across this tiny tomb of terror. While this series may have materialized for young adults, foolish mortals of all ages will gleefully groan at the creepy content. In regards to any type of “boo” factor, I barely managed to dig up two minor complaints:  there is not enough of Madame Leota in a book bearing her name in the title, and the various volumes are crawl from the graveyard far too infrequently.

Volume two continues an anthology of interconnected creepy cool tales cemented together by the Haunted Mansion, a series of stories that could easily become a tempting television series similar to Serling’s “Twilight Zone.”

Fangtastic fiendish fun, “Tales from the Haunted Mansion Volume II Midnight at Madame Leota’s” is a must read for horror fans and those eerily endeared to that ghostly retirement home found in every Disney theme park, the Haunted Mansion. Be sure to conjure up your copy at Amazon.com Comments Off on REVIEW: Tales from the Haunted Mansion Volume II: Midnight at Madame Leota’s