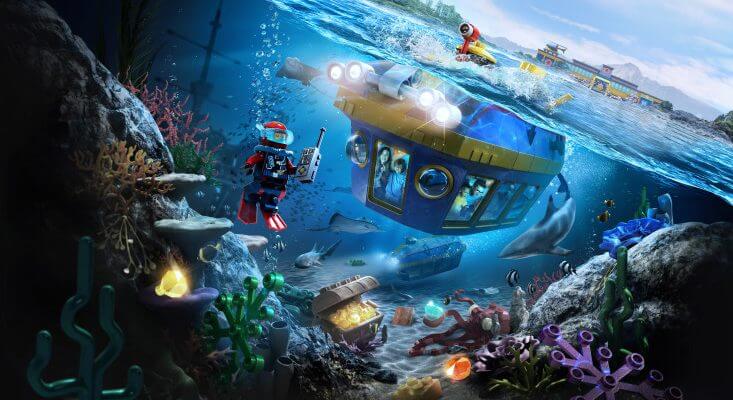 Legoland California held a press event today to announce two new attractions that they will be adding to the park in 2018.

This first  will be a new 4D experience called “LEGO Ninjago, Master of the 4th Dimension.” The attraction, which is based on the same property that will see a movie hit theaters this September, is planned to open across all Legoland parks in January of 2018. The second attraction is reported to be the parks largest ride investment yet. “LEGO City: Deep Sea Adventure” is said to be the first of its kind in North America.

The attraction will be an interactive submarine ride that will not just allow guests to view sharks, stingrays and other wildlife through portholes, but invite them to search for hidden treasure and earn points with each item they find.

Legoland California shared a video of the announcement of “LEGO City: Deep Sea Adventure” on their twitter account.

“LEGO City: Deep Sea Adventure” is planned to open in the summer of 2018.

Legoland California General Manager Peter Ronchetti also announced that the Legoland Castle Hotel is set to open in the spring of 2018. The medieval-themed hotel will be designed to be the perfect experience for the entire family.

With all of these new additions to the park, Legoland California is looking like it will have big year in 2018.