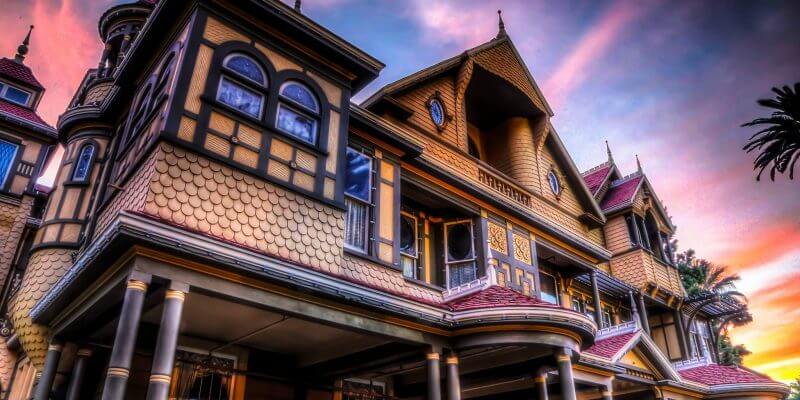 Forget walking through some temporary maze and waiting for a scareactor to pop out. This Halloween season, you can explore a real haunted house with nothing but candlelight and your imagination. The Winchester Mystery House in San Jose, California has brought back its incredibly popular “Hallowe’en Candlelight Tour” for 20 frightful nights this season.

It’s just one of the ways this piece of California history is expanding to allow their guests more opportunities than ever before to truly see all the wonders hidden within this foreboding abode. At the recent Midsummer Scream convention in Los Angeles, I spoke with Walter Magnuson, General Manager of Winchester Mystery House for the past couple years. In his time there, he has taken charge of bringing new life to this aging attraction, giving both tourists and locals alike reasons to visit and to return.

Magnuson’s not a stranger to themed entertainment. Throughout the past 15 years, he has worked at Walt Disney World, NBC Universal Television Studios, Disney Music Group, The Walt Disney Studios, and as a Senior Manager at the Disneyland Resort. He began his tenure at the Winchester house by exploring every nook and cranny of the sprawling estate, both by joining guests on existing tours and venturing out on his own, armed with a skeleton key – no doubt a great perk of becoming the house’s General Manager.

Inspired by his exciting findings, he worked with the house’s maintenance team to find ways to take guests to new areas safely. Thusly, Winchester’s new “Explore More” tour was born, kicking off a few months ago, now allowing visitors to venture into previously off-limits areas of the house as part of the first all-new tour to debut there in more than two decades.

Among the most popular new spots seen on the new tour is the “Witch’s Cap” – a particularly inviting turret that Magnuson describes as “particularly iconic” from the outside, even more impressive within. A recent visit by medium James Van Praagh to this room suggested it’s a rather haunted area, with seances held there many decades ago. For the upcoming spooky candlelight tour, guests will explore the 160 rooms of this 132-year-old house in what Winchester describes as an immersive horror experience. Candlelight provides the only illumination throughout this storied Victorian mansion. Magnuson describes this experience as “theater of the mind” with special lighting, sound, and other entertainment elements designed to unnerve you. While there are no “boo” scares, rest assured there will be surprises during the experience that remind you an unseen presence seems to be following you on your tour. The Winchester Mystery House is the former home of Sarah Winchester, heir to the Winchester Repeating Rifle fortune. The spirit of the grieving widow is said to wander the halls of the mansion.

Looking ahead, the Winchester house will no doubt receive a whole lot more attention when the Hollywood film “Winchester” starring Helen Mirren hits theaters next year. Magnuson was at the house when Mirren filmed at the house in May, describing her as “unbelievably passionate and so well researched” to the point where “she could have given her own tour of the house.” In addition to filming on location, the production team recreated rooms from the house on a soundstage with striking detail.

Since the Winchester house first opened for tours in June 1923, more than 12 million people have visited. In the years ahead, Magnuson plans to continue to take additional steps to allow guests to see even more areas of the beautiful mansion in new ways. They’ve experimented with one-off dinner parties in the past that offered visitors the ability to freely wander, rather than being guided around and they intend to push that idea further with new events.

Magnuson says it’s always been easy to draw tourists to the Winchester house but difficult to attract locals, who tend to drive by it regularly but never quite stop to visit. He’s hoping the new and upcoming additions will entice more people to finally stop by.

For tickets and more information on the “Hallowe’en Candlelight Tour” at the Winchester Mystery House, visit the attractions official website.