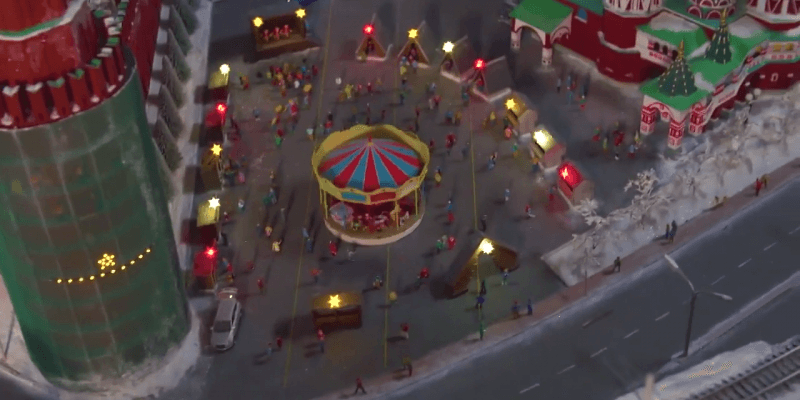 With an elaborate new miniature model exhibit called Gulliver’s Gate, you can see the whole world without leaving Times Square.

The project, led by CEO Eiran Gazit, opened to the public in May. Featuring tiny scale models of famous tourist destinations like the Eiffel Tower and the Taj Mahal, the attraction packs a global immersive experience into one New York City block. Gulliver’s Gate also contains whimsical elements, which can be found throughout the models. In London, mini versions of The Beatles cross Abbey Road. A mummy chases tourists in Egypt, while sightseers in Scotland snap photos of the Loch Ness Monster.

Preview the expansive miniature world of Gulliver’s Gate in the video below.

Model makers from all over the world were brought on to create train model scale versions of their own regions, at a ratio of 1:87. Artists were given freedom during the creation process, so each of the 300 areas in the exhibit features the designer’s unique style.

Teams around the world worked simultaneously to create Gulliver’s Gate. Some designers worked by hand while others used 3D printers, and build times varied by region. For example, the New York model was built in Brooklyn over the course of a year.

Miniature people are featured in the exhibit, along with planes, trains, and automobiles. For $44, guests can create miniature versions of themselves with the help of a 3D body scanner. One version is given to guests to take home, while another even smaller version gets to stay in the exhibit. As Gazit told Blooloop, “A smaller version of themselves gets to live in our space in a location that they choose for the rest of our lives. It’s an interesting way to create an identification between the guests and the brand.” Guests are also given a key with an RFID sensor. When inserted into an exhibit, the model comes to life with movement and sound.

Ticket prices for Gulliver’s Gate start at $27 for children and seniors and $36 for adults, but online discounts are available if you book through the Gulliver’s Gate website.