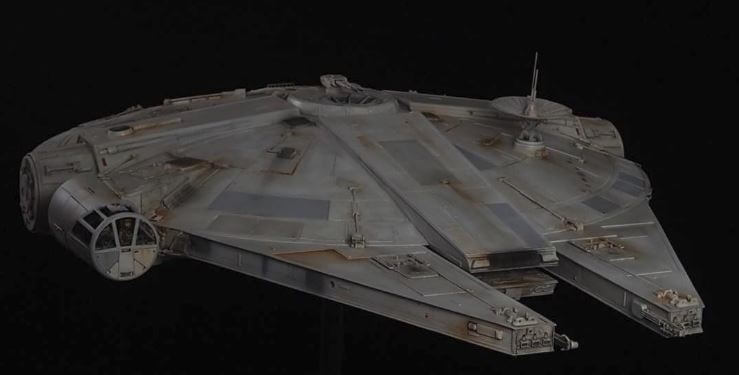 There’s little doubt that George Lucas’ space saga, “Star Wars” had a significant impact on thousands of young minds in 1977.  Inciting imaginations and fueling fantasy for a generation of children, Luke Skywalker’s story started many down a path of creativity.

In this edition of At Home Imagineering, we find one such influenced individual.  Encouraged by his parents to be creative in crafting model kits as a child, that attention to detail has turned into both exciting employment and a pastime of precision and pleasure for master model maker Jason Eaton. The skill of weathering off the shelf model kits that Jason learned from his mother has evolved into a fine art of fabricating fantastic replicas from the Star Wars universe and beyond.  The same fine-tuned talent lends itself to his second job at Sideshow Collectibles crafting paint masters. As a child Jason wanted to be the guy who makes and “blows up” TIE fighters.  His dedication to detail in the models he crafts proves that passion is just as strong today.  The full time graphic designer doesn’t just build models; he strives to create screen accurate representations of the mock-ups he makes. This, at times, has proved to be a challenge when it comes to finding just the right part or model kit used in to make the model at hand. Ever on the hunt to learn the clues to the elements used by the effects craftsmen, Jason has been fortunate to be able to talk to several modelers who’ve worked on the iconic incarnations he strives to accurately recreate.  Sometimes new information about a particular part may have him rebuilding a project several times.

When asked about some of his favorites, the Millennium Falcon is the first ship to be stated.  As such, his most recent project was a seldom seen special edition of Han Solo’s ship – one based on 1970’s concept art for the first film. Other projects have included items barely seen on screen, like a crane found on the surface of the Death Star. In this charity event called “The Shoe Project,” a pair of Vans sneakers were transformed into “Twin Pod Cloud Vans” as take on the Pod Cloud craft  from “the Empire Strikes Back.” The clever concept fetched $511.00 in auction for the charity. The attention to fine detail and intricate electronic workings of this memorable aircraft from “Blade Runner,” is simply astounding and a sight to behold. Take a look at all of Jason Eaton’s master model making magic on his blog or follow his latest endeavors via his Instagram account.  There you’ll see find fantastic fabrications like the Colonial Movers ship or Mark I viper from “Battlestar Galactica,” Probe Droid from “the Empire Strikes Back” and a studio scale Landspeeder from “Star Wars.”  Examples of his paint work Sideshow Collectables can also be found on the Mystery 10 blog. Progression of the Millennium Falcon build