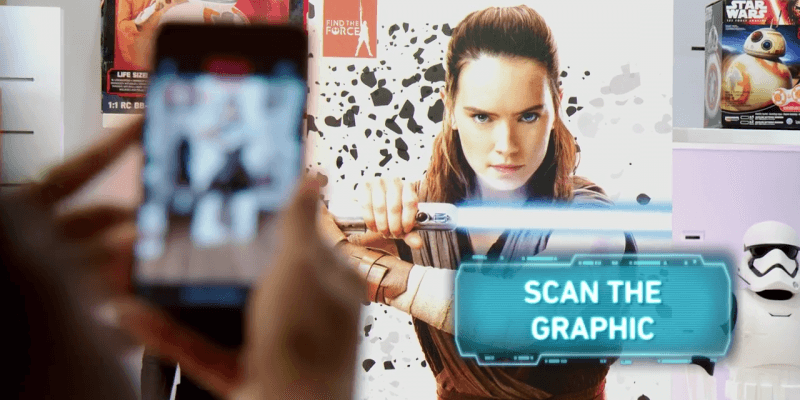 After the success of Force Friday in 2015, Disney and Lucasfilm have announced a global event to celebrate the launch of “Star Wars: The Last Jedi” merchandise.

On Force Friday II, fans are invited to “Find the Force” with a pop-up augmented reality treasure hunt. Battle against the dark side during the three-day event taking place at more than 20,000 retail locations across 30 countries.

From September 1 – 3, fans visiting participating retail locations can find a graphic containing the “Find the Force” logo. When the graphic is scanned using the “Star Wars” app, a character appears in the room via augmented reality. Take photos, record videos, and share the experience on social media. New characters are revealed each day (15 characters total over the course of three days.)

Take a look at the “Find the Force” how-to video below.

Force Friday II arrives in Disney parks on September 1 at 12:01AM. Guests can purchase the new “Star Wars”-themed merchandise, including unique items found only in Disney parks.

Pre-registration is required to attend the Force Friday II event. Registration is accepted only on the Disney Parks Merchandise website starting August 24 at 11:00AM PST/2:00PM EST. Once registered, guests receive additional instructions via e-mail.

Registration for the Force Friday II event takes place outside the World of Disney store entrance across from Basin on August 31 starting at 6:00PM. Guests are given a numbered wristband on a first-come, first-served basis and invited to return to World of Disney at 11:30PM to line up in order. Doors open at 12:01AM. As a bonus, fans who share AR experiences on social media using #FindtheForce and #Sweepstakes hashtags may have the chance to win tickets to the “Star Wars: The Last Jedi” premiere in December. For more information and eligibility rules, visit the Find the Force website.