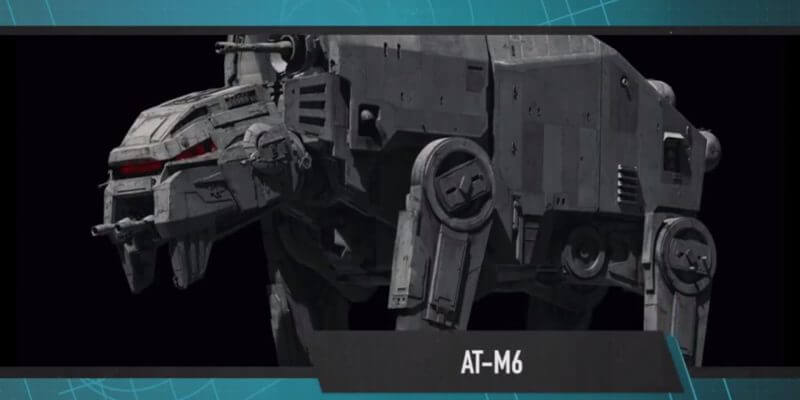 As we approach this year’s Force Friday “Star Wars” merchandising event next week, more details are emerging about what new modes of pan-galactic transportation fans will see in the newest movie set in a galaxy far, far away.

On this week’s installment of Lucasfilm’s official Star Wars news webseries “The Star Wars Show,” hosts Andi Gutierrez and Anthony Carboni revealed and exclusive look at two new vehicles that the nefarious First Order will be utilizing in “Star Wars Episode VIII: The Last Jedi,” when it hits theaters this holiday season.

First up, the AT-M6 Walker, whose acronym stands for All-Terrain Megacaliber Six, is a mobile unit comparable to the famous AT-ATs first seen in “The Empire Strikes Back,” but much larger. The heavy-artillery walker’s name is derived from the Megacaliber Six laser cannon mounted above its cockpit. And according to “The Star Wars Show,” the AT-M6 has “a more simian-like gait” than AT-ATs, to help stabilize the huge cannon. Secondly, we’ve got the First Order Dreadnought warship, which is stocked with two orbital autocannons and measures over seven and a half kilometers long (that’s nearly five miles). Also mounted on the ship are twenty-four anti-aircraft cannons, which to me implies we will see some kind of space battle against the giant ship in the new movie. “Star Wars: The Last Jedi” will be released nationwide on Friday, December 15th, and Force Friday will take place on September 1st at participating retailers.