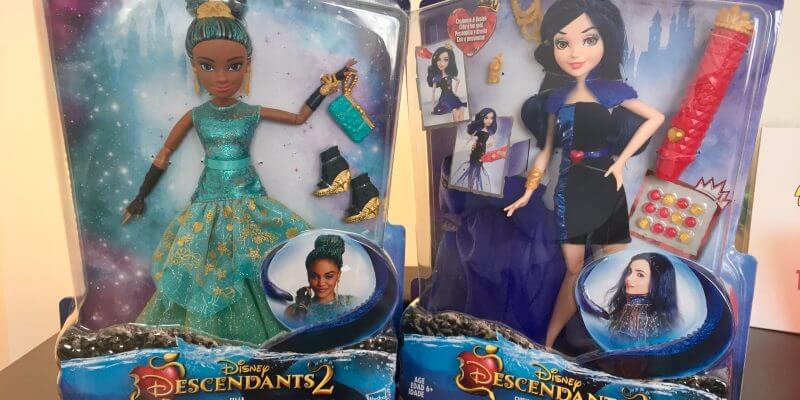 In anticipation of the massive simultaneous premiere of “Descendants 2” tonight, Hasbro has given us a preview of their new line of fashion dolls inspired by the movie.

“Descendants 2” continues the stories of the children of Disney Villains. Ben (the son of Belle and the Beast) is now king of Auradon, alongside Mal (daughter of Maleficent). After giving up her evil ways in the first film, Mal struggles to be royally perfect and opts to return to the Isle of the Lost. When she arrives, she’s stunned to see that new character Uma (daughter of Ursula) and her friends, Harry (Captain Hook’s son) and Gil (Gaston’s son), have taken over as rulers of the island.

The new line of dolls from Hasbro captures the fun and fashion-forward style sported by the characters in “Descendants 2.” The newest addition to the cast, Uma, is featured in her Royal Yacht Cotillion outfit and comes accessorized with black platform sandals and a wristlet to match her dress. Evie (daughter of Evil Queen) is featured in several different versions. Her “Isle of the Lost” look highlights her trendy style as a fashion entrepreneur. Evie’s “4 Hearts” style offers various accessories to mix-and-match her outfits. There’s also a sequin kit with velcro attachments so you can add sparkle to Evie’s different looks. The sequins are easily removable, so you can endlessly change her style. Add the heart and crown patterned skirt for a second look. Flip her base dress around and add the tulle skirt for a mix of formal and cocktail style. She’s also outfitted here with her additional bracelet and belt accessories, which are included in the box. And finally, use the sequin kit to add your own flair to her dresses. Ben and Mal arrive together in their Auradon Prep and Isle of the Lost style, respectively. Each of these dolls and more from the “Descendants 2” Hasbro line is available this fall. Prices for the dolls featured here range from $24.99 – $34.99 and they’re all geared toward ages 6 and up.