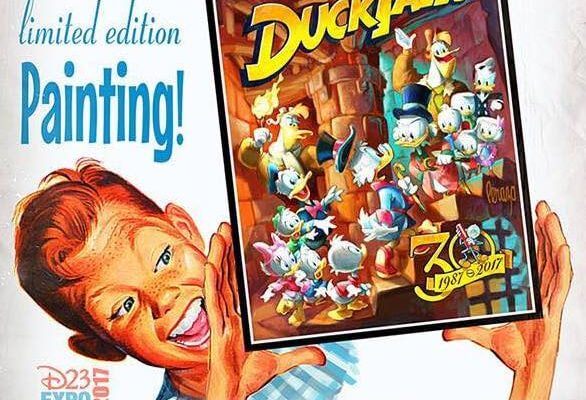 Disney artist Mike Peraza has created a “DuckTales” print to celebrate the 30th anniversary of the show, and fans everywhere will want to get their hands on the special artwork.

The limited edition painting shows the original 1987 versions of Scrooge and the gang meeting their 2017 counterparts. The artwork is highlighted in the vintage-inspired poster below. Peraza was instrumental in the creation of several animated Disney series, including “DuckTales,” “Chip ‘n Dale Rescue Rangers,” and “TaleSpin,” to name a few. He currently creates concept art for Walt Disney Imagineering.

The original “DuckTales” series premiered on September 18, 1987. The show returns to Disney XD with a one-hour TV movie on Saturday, August 12 before moving into its regular slot starting on September 23.

The “Beak to Beak” print by Peraza will be available at D23 Expo 2017 and Disneyland. For more information, visit the D23 Expo website.