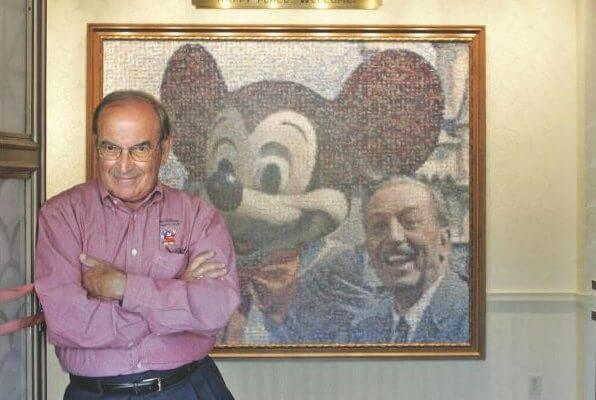 Legendary Disney Imagineer Marty Sklar has passed away in his Hollywood Hills home on Thursday at the age of 83.

It is with a tremendously heavy heart that I report the news of Marty’s passing.

Over the nearly 15 years I have been working alongside the Walt Disney Company to deliver fun from Disney’s theme parks, I had the good fortune to meet and converse with Marty quite a number of times.

I first met him when I was a finalist for the 2003 Walt Disney Imagineering ImagiNations competition. I’ll admit I was tremendously nervous to meet the man that was essentially Walt Disney’s right-hand man, writing his many memorable speeches, including the famous Florida Project speech that kicked off what would become Walt Disney World.

I spent time with Marty again at Epcot’s 25th-anniversary celebration, hearing stories of what it took to create what became the Epcot theme park following Walt’s untimely passing. It was Marty who banded the team of lost Imagineers together, insisting that they did not follow a mantra of “What would Walt do?” but instead carve their own path.

I ran into him again at the grand opening of Cars Land at the Disneyland Resort. He wasn’t there as part of the festivities, instead simply hanging out casually in the amazing new land, soaking it all in alongside other guests. He was a fan of the parks, just like the rest of us. Since then, I’ve seen Marty speak at countless Disney events, first while he still played an active role at WDI, then later after his retirement in a much more candid fashion, beginning to dish the real details of what went on inside the halls of the Mouse House while promoting his book, One Little Spark!: Mickey’s Ten Commandments and The Road to Imagineering.

Marty always carried a red pen on him, as it was the color of choice for Walt Disney to make notes. When I first met Marty, I made sure to bring a red pen with me to get his autograph – and I still have that paper to this day.

His gentle demeanor made him very approachable but his sharp wit kept you on your toes.

I can’t claim to have known Marty personally, but I am honored to say that I crossed paths with him more times than I can count, each one a delight and a surprise. I’m truly saddened by his sudden passing, so soon and unexpectedly after appearing at the 2017 D23 Expo. Perhaps it was appropriate then that I learned of the news direct from D23, just a few minutes ago.

With the note in my inbox came words from Disney CEO Bob Iger and Imagineer Bob Weis.

“Everything about Marty was legendary – his achievements, his spirit, his career,” said Bob Iger, Chairman and Chief Executive Officer, The Walt Disney Company. “He embodied the very best of Disney, from his bold originality to his joyful optimism and relentless drive for excellence. He was also a powerful connection to Walt himself. No one was more passionate about Disney than Marty and we’ll miss his enthusiasm, his grace, and his indomitable spirit.”

“Marty was one of Walt’s most trusted advisors and helped turn his most ambitious dreams into reality. For us, it’s hard to imagine a world without Marty, because Marty is synonymous with Imagineering,” said Weis, President, Walt Disney Imagineering. “His influence can be seen around the world, in every Disney park, and in the creative and imaginative work of almost every professional in the themed entertainment industry.” Marty was the only person to have seen the opening of every Disney theme park worldwide. It’s going to be a shock to not see his excited face whenever Disney decides to build a new one.

Marty is survived by his wife of 60 years, Leah; son Howard and his wife, Katriina Koski-Sklar; grandchildren Gabriel and Hannah; daughter Leslie; and grandchildren Rachel and Jacob.

Here’s a look back at some of the many appearances Marty made in the past few years that we had the good fortune of capturing, including a few conversations we’ve had with him: