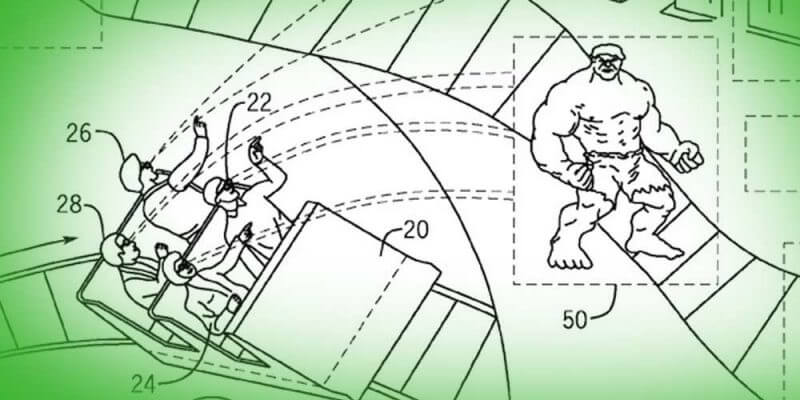 Universal Studios already has a lot of experience in the realm of 3D attractions, and now a patent filed by the park suggests they’re moving into the realm of augmented and virtual reality.

The application submitted to the US Patent and Trademarks Office details the use of augmented reality goggles on rides and exterior theme park settings, meaning guests could suddenly see a fictional character pop up next to them when riding an outdoor coaster.

As the patent says, “In one embodiment, the AR/VR image may include an image of a monster or other similar fictional character appearing (e.g., from the point of view of the ride passengers while wearing the electronic goggles) to be obstructing a portion of the tracks as the passenger ride vehicle traverses the tracks.” “Outside of providing an increasingly complex system of steep, twisting, and winding rollercoaster tracks, the thrill factor of such rollercoasters and/or other similar thrill rides may be limited to the existing course or physical nature of the thrill ride itself,” Universal said in the patent application.

While there is some speculation the new AR/VR goggles are intended for the upcoming Super Mario Kart attraction, the images included with the patent indicate they may be used for The Incredible Hulk coaster at Universal Orlando.

The ride reaches speeds of up to 67 mph and brings guests on seven inversions. If the Hulk were to suddenly appear as a virtual reality creation right next to riders as they speed through the twisty-turny coaster, it would certainly up the thrill factor on an already thrilling ride.

The Incredible Hulk coaster underwent some updates last year, and you can see the current queue in our video below.

As with all patent applications, this one for AR/VR goggles may not come to fruition.

You can read the full patent application here.