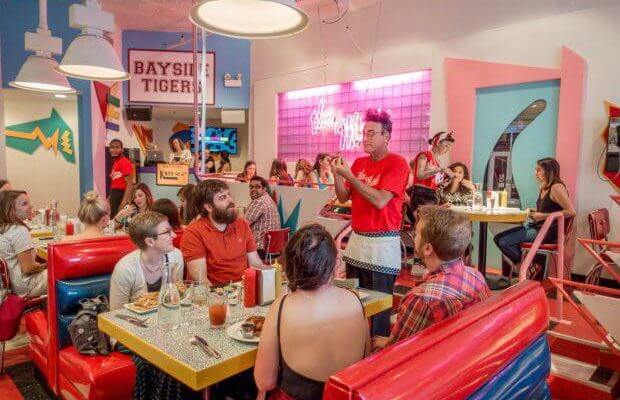 What started out as a one month “pop-up” experiment in Chicago turned into a one year run for Saved by the Max.  Inspired by and designed as a tribute to the 1990’s sitcom “Saved by the Bell,” the Windy City’s brightly colored café closed its doors on May 31st.

For fans that missed the chance to experience this nostalgic culinary drive down memory lane, all hope is not lost.  The highly successful sitcom send up is headed to Los Angeles in the first stop on planned tour.

While no official opening date or diner décor information has been released, if the Chicago experience is any indication, fans of the show are in for a real treat.  In its first incarnation, the pop-up shop bar and restaurant’s retro revelation remarkably resembled “the Max” as seen in the television series.  Saved by the Max is also sure to continue its “Saved by the Bell” themed menu of munchies and beverages.  The full menu is located on their website. For now, eager eaters are encouraged to sign up for a wait list so they can be among the first to learn of the new location’s opening information.  Reservations were highly recommended for the Chicago incarnation. Now that Saved by the Max is relocating to its TV time roots in Los Angeles, it’s bound to be even more popular.