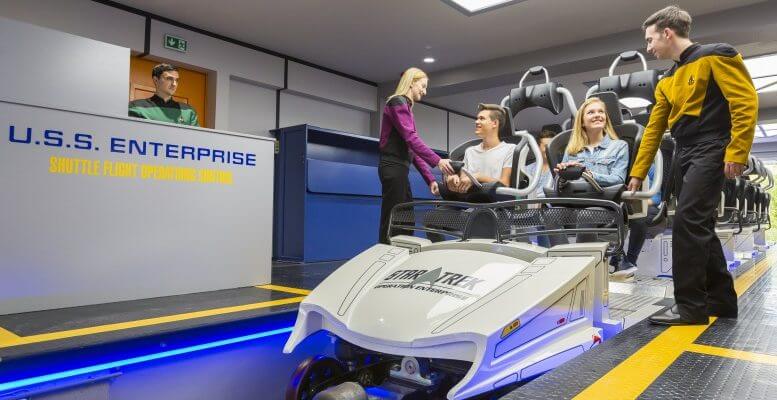 Earlier this year, we shared the news that a Star Trek-themed coaster called Star Trek: Operation Enterprise was heading to Movie Park Germany. Now, the ride is officially open and we’ve got a closer look at some of the thrills this new attraction has in store.

Riders begin the experience at Federation Plaza, a Star Trek-themed area that houses the attraction. Portraits of “The Next Generation” characters and replicas from the show line the halls of the main entrance. Inside the building, guests can see a replica of the U.S.S. Enterprise NCC-1701-D bridge, a holodeck, and two transporter rooms. As guests move closer to the coaster, they’re trained to become Starfleet cadets and prepared for their first mission. Here’s the synopsis for the Star Trek: Operation Enterprise story:

The Enterprise and its crew are on their way to a United Federation of Planets meeting when they are attacked by the Borg and taken aboard the enemy ship. The Enterprise is now unmanned and caught in a tractor beam. The only hope of rescue is the Starfleet cadets on the bridge of a nearby ship at the time of the attack. They are preparing to be launched out of their ship’s transporter room in shuttles on a rescue mission. This holodeck mission’s success depends on the cadets breaching the Borg ship’s deflector shield, destroying its main systems and saving the crew of the Enterprise.

After being prepped for the mission, it’s time to experience the thrilling coaster. Operation Enterprise features a new soundtrack composed for the ride. Take a peek at the Budapest Philharmonic Orchestra playing some of the new music in the video below.

To celebrate the ride’s opening, “The Next Generation” star Marina Sirtis will be making an appearance on June 14.

For more information on the new attraction, head over to the Movie Park Germany website.