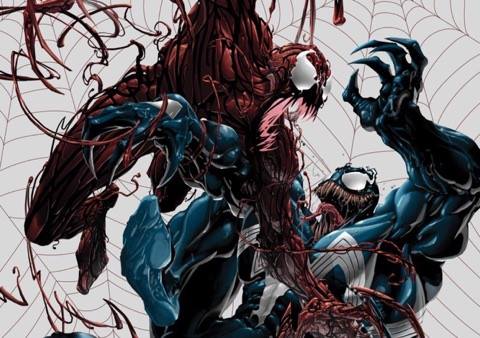 Last month, it was announced that Tom Hardy would be playing the titular character in Sony’s upcoming Spider-Man spinoff, “Venom.” Now, we have more exciting news about the film as it appears that Venom won’t be the only symbiote on the big screen.

In a story covering the state of Sony’s impending Spider-verse, The Hollywood Reporter casually mentioned that the upcoming “Venom” would also feature the villainous Carnage. If you were already looking forward to “Venom” before, you’re probably ecstatic now. The symbiotic serial killer has been the greatest thorn in Venom’s side since his inception in 1991.

So what exactly does this mean for the movie? Well, if it holds true to the character, it means this movie is going to be incredibly violent. It has already been rumored that the film will be rated R. If that is the case, get ready for some gore.

Cletus Kasady was a serial killer, imprisoned as a cellmate to Eddie Brock after he committed his crimes as Venom. Eventually, Brock escaped prison, as all super villains do, rejoining the alien symbiote that made him Venom. A piece of the symbiote remained though and joined with Kasady, creating the sinister Carnage. Over the years, Carnage, Venom and Spider-Man have battled countless times. The sadistic yet strangely brilliant methods of Carnage have made him one of the most popular villains Marvel has to offer. Fans have been clamoring to see him on the big-screen since the first Spider-Man film back in 2002.

If Carnage is really going to appear in “Venom,” there are a lot of questions fans will have. Is he the main antagonist? Who will play him? We’ll have to wait to find out.