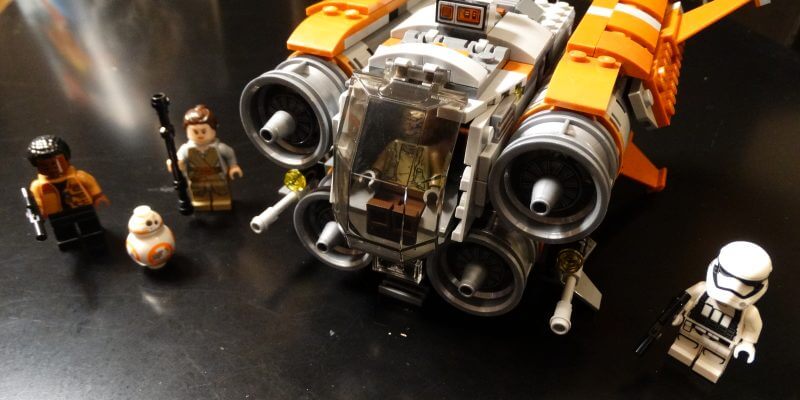 Star Wars and LEGO have been a match made in collector heaven for nearly two decades now, and it’s gotten to the point where the popular toy company has almost run out of existing ships and characters to turn into building sets. That’s yet another reason why it’s great that more Star Wars movies are currently in production– more films, scenes, heroes and villains mean a far wider variety of toys.

The Quadjumper is a ship that appears in just a few seconds of screentime in 2015’s “Star Wars: The Force Awakens,” but that doesn’t make it any less intriguing-looking. Rey and Finn dart toward the vehicle as they make their escape from the First Order on the planet Jakku, before it gets blown up and they are forced to fly away in the derelict Millennium Falcon. As of yesterday, LEGO’s intricately-designed Jakku Quadjumper set (#75178) has arrived in stores. Let’s take a look.


This set includes 457 pieces, four humanoid minifigures (Rey, Finn, Unkar’s Thug, and First Order Stormtrooper) and one BB-8 droid. It’s very impressively constructed and features a nifty blast-apart action that occurs with the press of a button/lever. There are also three stud-firing mounted blasters, one of which swings out from an opening rear panel. The cockpit seats up to two characters. The color scheme matches the ship as seen in the movie perfectly, though the scale is just a bit smaller than as depicted on screen.

The only other minor negative is that the set is accompanied by a small number of stickers, which can be tricky to apply in a perfectly straight manner. As always, printed pieces would have been preferable in those cases. The minifigures are terrific and plentiful for a set of this size, and fans will be happy to have both the good and evil sides of the action sequence represented in (almost) even numbers. With a retail price of $49.99, the Jakku Quadjumper just about matches what we’ve come to expect from the cost of LEGO in recent years (roughly ten cents per piece in the set, with a slight markup when a license like Star Wars is involved.) Still, the quality of these toys is so high that it still feels like a good value for what you get. LEGO’s Star Wars line has rarely disappointed in terms of design and playability. The Star Wars Jakku Quadjumper is available now from most major retailers and via the LEGO online store.