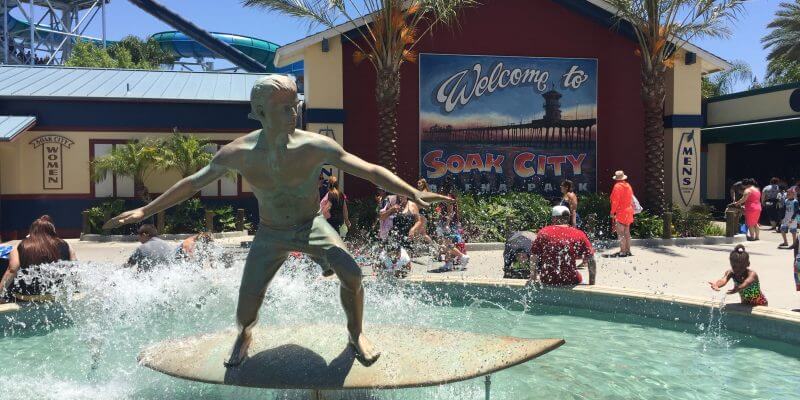 Not everyone is into water parks. Even in the fervent theme park fan community, water parks tend to take a back seat to the more heavily-themed, attraction-centric mothership parks at their respective resorts. A recent exception has been Universal’s high-profile Volcano Bay, which opened to rave reviews in Orlando despite some growing pains and first-week technical hiccups.

In Southern California, water park fans looking to alleviate the heat have a few options. Among others, there’s Raging Waters in San Dimas (made famous as “Waterloo” in the movie “Bill & Ted’s Excellent Adventure”), Six Flags Hurricane Harbor in Valencia, SeaWorld’s Aquatica down in San Diego, the new all-indoor Great Wolf Lodge in Garden Grove, and Knott’s Soak City, located just across the street from “America’s First Theme Park” Knott’s Berry Farm in Buena Park, just a short hop up the 5 freeway from Disneyland.

This past weekend I had the opportunity to spend a day at Soak City, after having visited last month for a guided construction tour of its new attractions, and I took note of the park’s positives and negatives while enjoying my time there. The first thing I noticed is that Knott’s Soak City is already extremely popular. It probably wasn’t the best idea for me to attend on a Saturday, but I was still surprised at the vast amount of people in attendance, most (if not all) likely Orange County locals. The annual passes at Knott’s are quite affordable, and therefore attract a large number of families who live in the surrounding areas. Consequently, Soak City was very crowded this weekend, and the lines for slides were all pretty long.

We didn’t wait less than half an hour for anything except the Sunset River “lazy river” attraction, which you can wade into at your own leisure. Even then, there was a shortage in tubes. Apparently Soak City has a limited amount of tubes that can be floating around at any given time, so it took a full trip around the river for us to get our hands on a couple of them, as other guests exited and were nice enough to give them up. Still, once you get going, Sunset River is a nice, relaxing, and surprisingly lengthy journey around the park.


On the more positive side, Soak City’s new attractions are stellar, even with the protracted wait times. The Wedge was our favorite: a family-style, six-person raft ride that careens down a twisty slide at high speeds, banking sharply with each turn. The Shore Break tower’s dueling tube slides are also a lot of fun, and its four sudden-drop capsule slides are intimidating, to say the least.

Comments Off on REVIEW: Knott’s Soak City is a refreshing water park alternative to Orange County’s other themed attractions