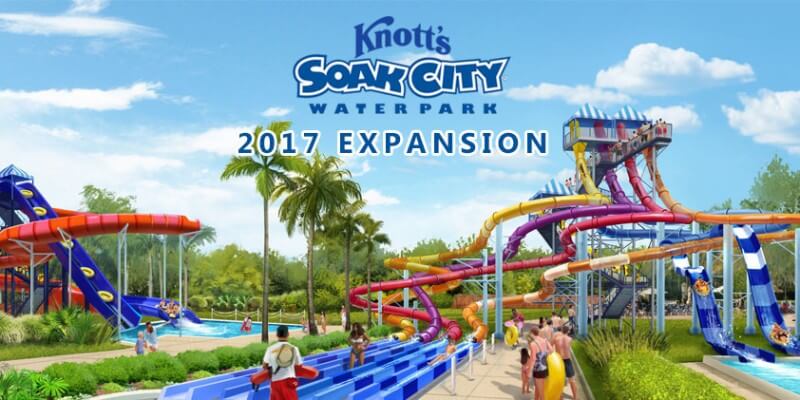 Knott’s Berry Farm’s sister water park Soak City opened in 1999 and has been enjoying its status as the largest water park in Orange County, California ever since.

This week Knott’s announced an expansion to the park that will add two new water slide towers to the existing roster of five slide towers, a lazy river, and a wave pool. The current Pacific Spin slide will be shut down at the end of the 2016 season and replaced by  “The Wedge,” which will be, according to Knott’s press release, “an open air family raft ride. Up to six guests at a time will descend down navigating twists and turns and surprise drops.”

The second new slide tower will be called Shore Break, and it will “tower over seven stories and offer six different thrilling water slide experiences:”

Four of the slides on the 60-foot tall tower will start with guests climbing inside an Aqua-Launch chamber where they will wait anxiously for the floor to drop out from underneath their feet, sending them into a high-speed, almost vertical free fall through a series of flat loops and S-curves in a translucent flume. Shore Break will also feature dueling tube slides that will zip riders through an enchanting series of drops and turns.

The upcoming expansion is scheduled to start construction in September, and will also include new shaded seating areas, cabanas, and a remodeled Longboard’s Grill. Guests can experience the new attractions beginning in May 2017. Be sure to visit the official Knott’s Soak City website for more information and details.