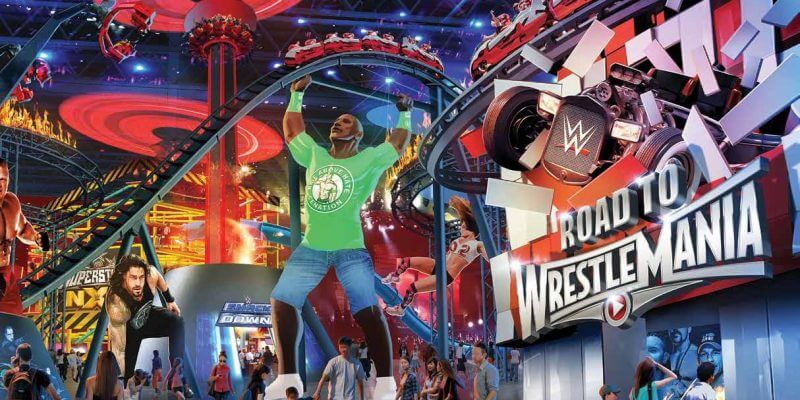 Is the WWE really planning to build the Ultimate Thrill Ride? Forrec, an international entertainment design company named recently released a publication detailing some of their latest projects.

Among those projects, was concept art for theme park based on World Wrestling Entertainment. This art shows some typical amusement park rides including a roller coaster, drop tower and some smaller flat rides. However, it also shows what appears to be a Wrestlemania-themed dark ride, a statue of John Cena propping up the roller coaster and an attraction that takes place in a wrestling ring. Forrec even went into detail on their attractions, saying that they would “mirror the signature moves of the superstars.”

They also gave a look at the ride vehicle for the “Road to Wrestlemania” dark ride. The company’s publication went on to mention that they would give WWE themes to already existing attractions. For example, a simple haunted house could be themed to WWE superstars like the Undertaker or the Boogeyman. They also mentioned an Andre The Giant-themed funhouse.

One thing that was not mentioned, was whether or not this park would stand alone or be a part of a WWE Hall of Fame. It was rumored for some time that a Hall of Fame would be built for the WWE and could potentially come to Orlando. It is unclear if this would be a part of that or if the hall has been scrapped altogether.

Do you smell what Forrec is cookin’? Or will this idea be smacked down?