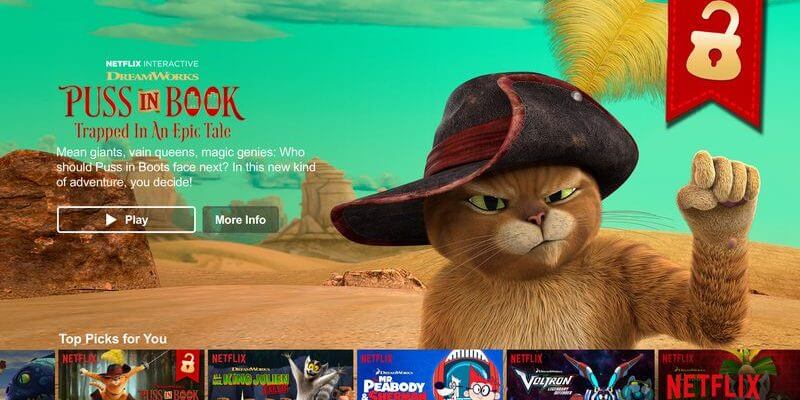 Just yesterday we reported on interactive film technology coming to the United States, and now Netflix has released its first interactive TV episode.

Aimed at children, “Puss in Boots: Trapped in an Epic Tale” gives kids more than a dozen decision points where they have to choose what happens next in the show. Netflix decided to gear their first interactive experiment toward children because younger audiences are already primed to touch and talk to screens. “They think everything is interactive,” said Carla Engelbrecht Fisher, Netflix’s director of product innovation.

“Puss in Boots” is available now, while a second interactive episode for the series “Buddy Thunderstruck” arrives on July 14. A third episode, “Stretch Armstrong: The Breakout,” is coming next year. Interactive shows are currently available on select modern smart TVs, iOS devices, game consoles, and Roku devices. You can’t use the interactive features on the web, Apple TV, Chromecast, or Android devices, but that may change in the future.

Using the device’s controller, you make narrative choices each time the show comes to a decision point. If you wait too long to decide, Netflix makes the choice for you. The episode length varies depending on what path you choose to follow; “Puss in Boots” can run between 18 and 39 minutes, and “Buddy Thunderstruck” is 12 minutes with no set end time, thanks to a potentially endless looping narrative. That will be great for keeping kids engaged, but may drive parents crazy in a “The Song That Never Ends” kind of way.

If the first batch of interactive episodes is successful, Netflix hopes to create interactive series where every episode has the choose-your-own-adventure aspect.