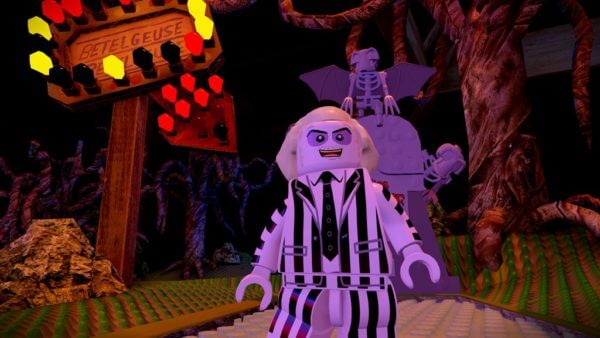 If you’re a fan of cult classics such as Beetlejuice, Teen Titans Go! and Powerpuff Girls then get ready, because new LEGO Dimensions expansion packs have just been announced.

Warner Bros. Interactive Entertainment just announced five new expansions packs coming to LEGO Dimensions. The new packs are all set to hit store shelves starting September 15.  The new LEGO Dimensions sets will be both Team and Fun Packs for both Teen Titans Go! and The Powerpuff Girls. The new expansions will also include a Fun Pack for Beetlejuice.

Starting with the Powerpuff Girls Team Pack, the pack comes with mini figures of all of the three sisters and a 3-in-1 Octi that can be rebuilt into the Super Skunk or Sonic Squad. The pack will also include the PPG Smartphone, which similar to the Octi can also be rebuilt. The PPG Smartphone can be turned into the PPG Hotline and the Powerpuff Mag-Net. The Powerpuff Girls Fun Pack will feature a Buttercup mini figure and the 3-in-1 Mega Blast Bot. The Mega Blast Bot can be rebuilt into the Ka-Pow Cannon and the Slammin’ Guitar. When players play as the Powerpuff Girls they gain access to adventure world. Some special locations within adventure world that fans of the show will enjoy are Pokey Oaks elementary, Rainbow Land, and Professor Utonium’s lab. The Teen Titans Go! Team Pack includes mini figures of the superheroes, Raven and Beast Boy and their 3-in-1 T-Car which can be rebuilt into the Forklift and T-Plane. The Teen Titans Go! Fun Pack will include the Starfire mini figure and the 3-in-1 Titan Robot. Players who play as Starfire will be able to use her abilities in battle. All Teen Titans Go! mini figures will give players access to several areas that were made popular in the TV show. This includes the Titans Tower and Wacka Doodles Amusement park. These new packs will be available for Xbox and Playstation systems and the Wii U.