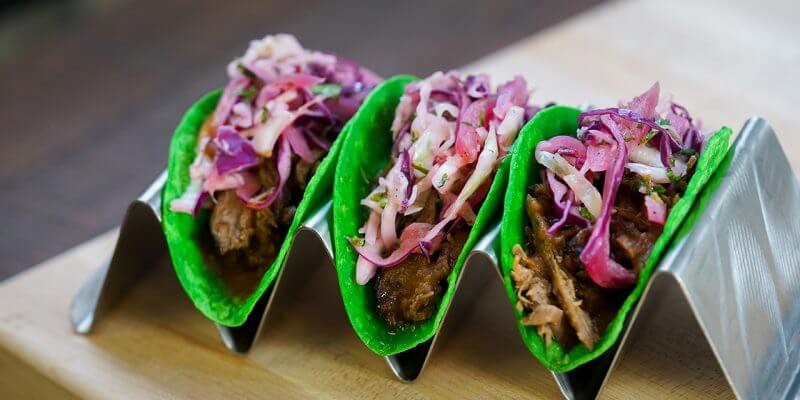 Let your taste buds experience magical new heights on both coasts of the country as Walt Disney World and Disneyland feature new menu items coming to their parks and resorts. Another burger making it’s way to the Sci-Fi Dine-In will make Vegetarians rejoice. The new Falafel Burger, which is crafted together with arugula, tomato, Tatziki sauce and red pepper aioli. All placed on a crispy chickpea falafel patty, held together by a brioche bun. A new summer special offering coming to Epcot’s Akershus Royal Banquet Hall is the Fylt Pasta. The pasta dish will leave you hungry for more as the new item includes four-cheese stuffed pasta with white whine-cream sauce and roasted vegetables. This cheese lovers delight is then finished with chive oil and a balsamic glaze. Narcoossee’s at Disney’s Grand Floridian Resort & Spa is kicking off the summer with surf and turf. This new feast from under the sea pairs a six-ounce lobster tail with a six-ounce sirloin served with Yukon gold rustic mashed potatoes and roasted spring vegetables. If your looking for a quick-bite at Animal Kingdom while visiting the park’s new Pandora – The World Of Avatar, you can now feast on the new open-faced BLT Sandwiches at The Smiling Crocodile. Both sandwiches are featured as one snack entitlement on the Disney Dining Plan. Guests can choose from turkey, salmon or pimento-cheese on toasted ciabatta with lettuce, tomato, and thick-cut smoked, house-roasted bacon.

Some other specialties that are coming to the east coast include candy-inspired beverages at Chef Mickey’s in Disney’s Contemporary Resort. This sweet treat features gummy bears chilling in a frozen pool of frozen cotton candy lemonade. The Watermelon Crush features nerds candy mixed into frozen watermelon and cherry lemonade. These delights can also be made special for adults as alcoholic versions are also available.

Pizza lovers, don’t feel forgotten, because Magic Kingdom will also be making available the Pizza Frusta. This new folded pizza will be an easy-to-eat on-the-go snack that will come with either tomato and cheese or pepperoni and sausage toppings.

Now take a look at some hot new specials making their way to the west coast at Disneyland for their Summer of Heroes. The event will be running through September 10.

Award Wieners at Disney California Adventure Park will feature two new items in celebration of the summer event. The Quiver of Funnel Cake Fries with mango and raspberry coulis and whipped cream and the Angry Little Pudding Cup with chocolate pudding, chocolate sandwich cookies, whipped cream and funnel cake fries (featured in the picture below). Schmoozes will be offering a new rotating menu of doughnuts that will be offered daily until 11am. Some of the doughnuts on the menu include the following.

Some smoothies coming to the sweet stop include the Terra-Berry, Rocket Fuel, Mango Mayhem, Strawberry Banana Breakout, and the Infinity-Ade (lavender lemonade), which is finished festively with a glow cube. The shop will also offer the Friendly Neighborhood Macaron, a vanilla ice cream-filled macaron.

If the hot sun gets you in the mood for something a little cooler, Bifrosties will also be featuring new shaved ice. All of the following flavors will have the option of adding a scoop of vanilla ice cream. The Cosmic Canteen will additionally feature Breakout Beverages which include Krylorian Koolers – Non-alcoholic strawberry or watermelon lemonade and Assorted Coca-Cola beverages. To fit the hero theme, an appetizer to be offered at the eatery will be the Jalapeño-Cheese Groot-Shaped Bread.

Guests to the Cosmic Canteen should also check out The Most Dangerous Tacos in the Galaxy. These barbacoa beef tacos are made with green onion slaw, purple cabbage, pickled onions, habanero salsa and green tortillas. A vegetarian version is also available as well. Other options to checkout at the restaurant include the following.

All of the options above are available in vegetarian versions and will be featured at the Cosmic Canteen until June 6.

Fairfax Market will follow suit with The Cosmic Canteen with their very own Guardians of the Galaxy themed Sourdough Groot-Shaped Bread.

Be sure to also check out our coverage of the food options available at the new Pandora – The World Of Avatar land in Disney’s Animal Kingdom.