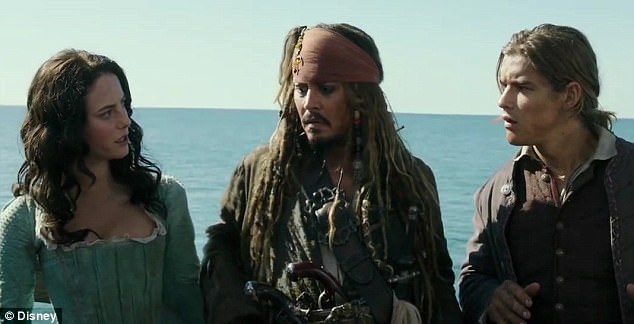 Kaya Scodelario got her start in Hollywood playing Sam Rockwell’s daughter in one scene of Duncan Jones’s criminally underrated 2009 sci-fi thinker “Moon.” She then went on to star as Teresa in both “Maze Runner” movies.

Brenton Thwaites has been acting in movies and television for about the same length of time, popping up in everything from Disney’s “Maleficent” to the 2013 horror film “Oculus.”

Now they’re both starring in the fifth “Pirates of the Caribbean” movie “Pirates of the Caribbean: Dead Men Tell No Tales” as the new female and male leads, Carina Smyth and Henry Turner. I had the opportunity to sit down with Scodelario and Thwaites (plus a few other reporters) this past weekend to discuss what it was like coming aboard such a popular, enduring franchise. Q:  How did you both come aboard “Pirates of the Caribbean: Dead Men Tell No Tales”?

KAYA SCODELARIO:  I actually heard of the script years ago, when it was doing the rounds the first time, and the part was very different. I think it was two characters at the time, two female characters. So they really didn’t know who she was yet. Then it disappeared and came back around a couple of years later.

I was actually shooting the second “Maze Runner” movie [at the time] and I needed to do a self-tape [performance], because I didn’t have time to get to a late audition. So I got all the [“Maze Runner”] boys to do the tape with me. They played Jack Sparrow and Gibbs and all the different characters.

BRENTON THWAITES:  Gee, that’s a short film in itself. [laughs]

SCODELARIO:  [laughs] And then I was flown out to L.A. to chemistry-read with Brenton. He was already cast, so we did [that] just to see how we worked together as actors, and how we could lift the dialogue from the page. And luckily I think we had a really cool connection, and it went from there.

THWAITES:  I auditioned a few times here in L.A. with a casting director called Ronna Kress. What followed was a meeting with the directors [Joachim Rønning and Espen Sandberg], and they took me through their ideas and their dreams for the project. And the movie was on hold for a while, and those guys went and did something else, and I went and did a few other movies, and when it came back around I just auditoned [with] similar material. I think it was even the same scene.

What followed that round was a meeting with [producer] Jerry Bruckheimer and [executive producer] Chad Oman, and then I was cast and involved in the chemistry reads for casting Carina. That’s where I met Kaya. Q:  What were your experiences with the previous “Pirates of the Caribbean” movies?

SCODELARIO:  I was thirteen when the first movie came out, and I remember it being a huge part of the social scene at school, before social media and all that, when you used to actually whisper in the playground about stuff and discuss what was cool, and what everyone was going to go watch.

THWAITES:  When humans used to talk to each other.

SCODELARIO:  [laughs] Yeah, back then. It was totally the thing that week that everyone spoke about. And that was really exciting for me. So when I actually got on set…

I had met Johnny [Depp] at the table read, and that was pretty cool. I really admire him as an actor, and I got that out of the way. But when he [did] step on set as Jack Sparrow I completely lost it. I went full fangirl, because it is such an iconic character. He’s like Mickey Mouse. He’s created something that requires so much craft as an actor, but is also so fun and easy for everyone to enjoy. And I think that’s pretty amazing, to create such an iconic character like that. THWAITES:  I agree with that. Seeing Johnny in the [table read], he’s really sweet and nice and friendly and he takes ideas and improvises and that’s great, but in costume when he’s working, seeing him for the first time as Jack Sparrow, that’s mesmerizing.

I was exctied to see that number five [“Dead Men Tell No Tales”] was kind of leap-frogging from number three [“At World’s End”]. I feel like number four [“On Stranger Tides”] went off tangent a little bit, although it did really well and people loved it. I loved it as well, but we lost a little bit of that storytelling and the qualities we loved so much of the first three. So when I found out the characters were kind of continuing the storyline from the third [movie] I was really excited and just wanted to see where it would go. Q:  Were you both fans of the Pirates of the Caribbean Disney theme park attractions?

THWAITES:  I’ve been on the one in Shanghai a week ago, and the one in L.A. a couple days ago.

SCODELARIO:  A couple of days ago? Why didn’t you invite me? [laughs]

THWAITES:  I took my family! I was doing the family thing. [laughs] Sorry.

THWAITES:  The one in L.A. is great for story, because you’re there and you see the old dolls drinking beer and it’s kind of fun and soft. I had my little kid with me and she was loving it. But the one in Shanghai is a spectacle. There’s a fifty-foot screen, one-eighty-degrees in curvature, and you feel like you’re at the bottom of the ocean. It’s 3D, so water’s spitting at you, and there’s air, and people yelling. It’s crazy.

WATCH PIRATES OF THE CARIBBEAN: BATTLE FOR THE SUNKEN TREASURE RIDE AT SHANGHAI DISNEYLAND:


Q:  Kaya, what was it like shooting an entire action sequence with a noose around your neck? Was that frightening?

SCODELARIO:  It’s quite scary, actually. I didn’t think it would freak me out as much, but I instantly thought of my mom, weirdly. I was like, “I don’t know if my mom would like this. She wouldn’t like seeing this.” It was odd, but it was fine. They had it on a magnet, so if anything were to happen it would easily pop open.

THWAITES:  They didn’t actually tie a real noose around the lead actor? [laughs]

SCODELARIO:  [laughs] No, they had it all worked out safely. But I had actually broken my shoulder the week before, so having my arm in that position was the hardest part for me. I had to wear a sling in-between takes and try and rest it as much as possible.

Q:  How did you break your shoulder?

SCODELARIO:  I slipped on the Black Pearl, of all things. We had it on a gimbal so it looked like it had docked on land, and I was running from the bow to the stern, and I tripped on one of the steps and I caught myself with my left arm, and that caused my shoulder to pop out. It’s all good now. [laughs]

Q:  Your character is accused of being a witch. Do you have any experience with the supernatural?

SCODELARIO:  I was born on Friday the thirteenth. My mom is Brazillian and she’s very superstitious, and she says I have a witch’s freckle on my ear. So I felt like maybe I just had that in me anyway. I kind of tapped into my witchy side. Q:  Do you think it’s important for blockbuster movies like this to feature strong female characters?

SCODELARIO:  It’s completely important. I think it’s the biggest thing, and there’s a reason why that question never gets asked to guys, because their characters are always fleshed out and interesting, and they’re assumed that they’re going to be strong and independent and all these things. But yet there still has to [be] this conversation over a strong independent female role. And that’s such a shame, but I think it’s great that we’re speaking really honestly about it now and I’m happy to fly the flag for that.

It’s an honor to play a woman that is so layered and so interesting, because I don’t know a single female that isn’t. I don’t know any woman that’s just simple, that you can define in one word or one sentence, so why should that be what we see in a movie? There’s so many stories to be told, there’s so many layers to peel back. [Carina is] great, and I’m really grateful to Disney for making sure [powerful women are] a part of this franchise, and still holding strong with it. I’d like to see maybe five chicks in the next one, and one guy. [laughs]

THWAITES:  Can I be the one guy?

SCODELARIO:  You can be the one guy. He’s a feminist, he’s allowed. Q:  Brenton, you play Henry, the son of Orlando Bloom’s character Will Turner. How are Henry and Will similar?

THWAITES:  I feel like I’m similar to Will in the sense that we’re both fighting for similar goals. We’re both very focused and driven and fighting for what’s good. We both have a moral compass and we don’t really steer too far outside of that. In the first [three movies], Will’s fighting to save his father, and stops at nothing in order to do so, and Henry’s doing a similar thing in this one. So I feel like there’s similar determination in the characters.

Q:  Would you both like to further explore your characters in another “Pirates” sequel?

SCODELARIO:  I’d love to, I think it’d be really cool. Especially with how Carina ends this movie– this new identity that she’s suddenly given. I think it would be awesome to see if she’s like to follow in Daddy’s footsteps, or if she’d like to focus on her astronomy, or combine the two. I think there could be quite an interesting thing there.

THWAITES:  I think there’s a nice moment at the end of this movie that kind of feels like the start of a journey. The great thing about this is we’ve come so far and do so much, but at the end of it you almost feel like it’s the start of something. And I feel like Henry and Carina have such a great journey, because they start off despising each other with separate beliefs, and basically throughout the film start a relationship when they start to understand more about each other and eventually realize they’re on similar paths. So it would be great to see those similar paths go somewhere, and take a journey together somewhere. To where, I don’t know. Doing what? I could guess. [laughs]

THWAITES:  What are you talking about? My guess is sailing the seven seas with Jack Sparrow fighting pirates! [laughs]