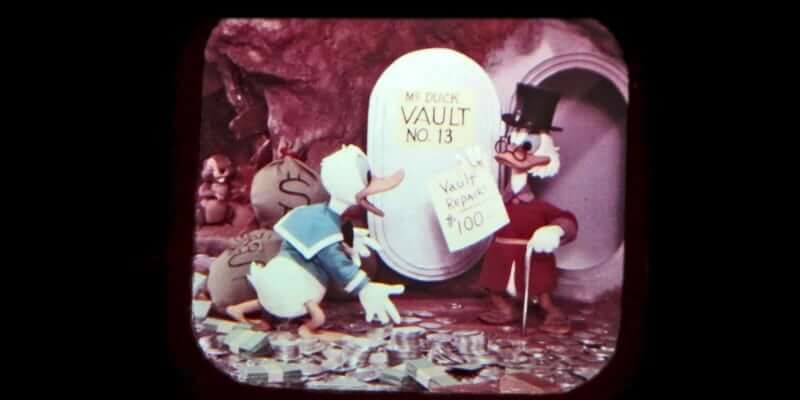 Today it is rare that a modern block buster film is not released without a 3D version. Though this could be considered a revival of similar features of the 1950’s,  3D entertainment can be traced back to the stereoscope – which was made into a modern novelty by the infamous View-Master viewer. Much like the video cassette of the 1980s, the View Master reel and viewer provided a window into the entertainment realm of its time.  In the early days of this stereoscope sensation that would feature mostly scenic and tourist images (a 3-D post-card) and would eventually expand to children’s stories, Disney characters and stories to popular television shows.

Many of the 21 frame stories (3 reels of seven 3-D images) would resemble the window of one the shops on Disneyland’s Main Street.  Each frame depicting a snapshot of a particular story featuring characters with depth and expression (not unlike a frame from “Nightmare Before Christmas”). This fascination with the depth of the third dimension goes back over a hundred years. History: Long before we were spending hours at the local Blockbuster trying to decide which movie to bring home and watch; longer even than before television came about, 3-D images were the entertainment of the times.  Invented in 1839, this 3-D illusion was achieved with lining up two mirrors to reflect two images (drawings – as photography had not yet progressed to have images readily available) so that they appeared to be one image with depth.

By 1861 the device was simplified and able to be handheld.  As a simple handheld device with a photographic card – the stereoscope was now affordable and popular.  The 1861 “Holmes Steroscope” is still made today (there is one on a table in the ballroom of the Haunted Mansion at Walt Disney World FL). Sawyer Inc. (one of the largest color postcard producers of the time) streamlined the device even more in 1939 by taking color images (Kodachrome color film was now available) and placing them in between two paper discs (14 images for 7 stereo views) and inserting this disc into a special viewer which eventually became known as the View-Master.

The device was a hit at the 1939 New York World’s Fair.  As Sawyer Inc. was a postcard company, the first reels were a series of travel related images of the Grand Canyon and Carsbad Caverns.  Success of the new View-Master and its travel reels eclipsed postcards in popularity.  The U.S. Government requisitioned an impressive six million reels along with 100,000 viewers for WWII training. Sawyer Inc. acquired Tru-Vue (a competing stereoscope manufacturer), and the process, the rights to use Walt Disney Studios’ characters in their reels.  A year later (1952) a home use camera was even sold so families could make their own reels.  Several models of View-Master viewers were developed (including a model with its own illumination).  1962 saw the arrival of the “modern” View-Master.  Model E was streamlined, and now made of a lighter plastic. Over the next few decades the company changed hands several times.  GAF purchased Sawyer in ’66 and turned its focus more towards children and away from the initial scenic reels.   Hundreds of reel options soon became available including popular television shows, toys and tourist attractions.  Projectors for the View-Master reels were developed as well as a “talking” View-Master.

GAF sold View Master, in 1981, to the company that would eventually become IDEAL Toys (which was purchased by Tyco toys in 1989).  Fisher-Price took over the View-Master division when Tyco merged with Mattel.  Fisher-Price made the decision to only focus on children’s reels (cartoons and toys).  The last attraction reel was produced in the end of 2008. The View Master reels could, at one time, could be found at almost any toy store and department store and at theme park gift shops.  The original postcard/travel intent of these 3D reels pushed out millions of scenic View-Master reels on hundreds of topics.  Amazingly reels from 1939 to 2009 can be used in just about any viewer.  Today dozens of websites and resale sites (like E-Bay) offer many of these diverse reels (which were usually sold in the three reel sets of 21 images) as well as the various hardware (viewers, projectors, kits) in the View-Master line. For those looking for a unique and nostalgic way to preserve an event, there is even the option to have a custom reel and viewer created.   Check out RetroViewer’s website for details. Did you own one of the many incarnations of the View-Master viewer?  What were your favorite reels?  Please share your 3-D memories in the comments below.