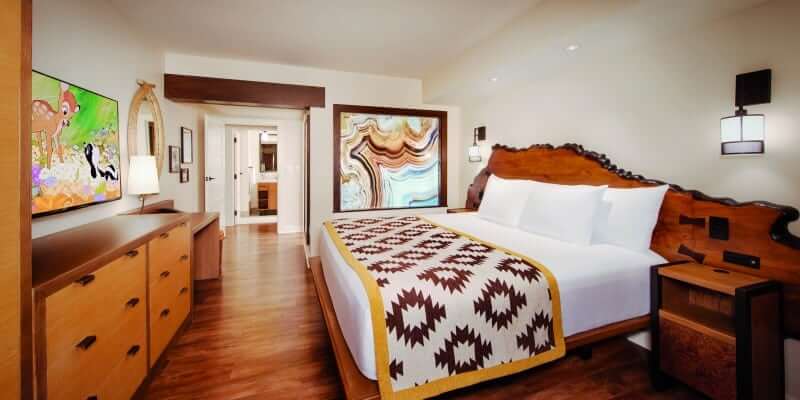 Yesterday, Walt Disney World led a preview of the still-under-construction Wilderness Lodge addition, revealing new details about the accommodations, amenities, and food soon to be found within. This segment is the last chapter in a backstory that unfolds for guests on property. In that backstory, the three resorts combine to form a narrative of different eras in the life of the Transcontinental Railroad.

The Boulder Ridge expansion evokes a bygone era, depicting the creation of the railroad in the late 1800s. Taking inspiration from genuine rustic communities that have grown and developed alongside the tracks, tributes to America’s railroading history can be found throughout the resort. Disney’s Wilderness Lodge depicts the continued development of the railroads in the early 1900s, paying homage to the lodges that welcomed travellers of the era and showcases the natural beauty that led them West. Copper Creek, though, is a celebration of contemporary living in the Pacific Northwest, depicting the evolution of an abandoned railroad into robust communities that have evolved through the decades and continue to thrive today. Boasting rustically elegant accommodations, Copper Creek is a collection of Deluxe Studios, one- and two-bedroom villas and three-bedroom Grand Villas (which sleep up to 12). The new resort also comprises 26 luxury waterfront cabins (which sleep up to eight), featuring two bedrooms, two bathrooms, expansive living and dining spaces, and screened-in patios. Repurposed railroad relics and natural elements take center stage as stone-hearth indoor/outdoor fireplaces and exposed wooden beams bring the beauty of the great outdoors into your living room. Steel accents and native American textiles add even more thematic ambiance to the accommodations, making you feel as if you are immersed in the history of a pivotal point for our country. As lovely as it all is, the primary selling points for these units are actually outside – sunken hot tubs that are built into the porch floors so that guests can enjoy the open air as they soak in the rustic beauty of their personal surroundings.

Those that stay in the Deluxe Studios or one- and two-bedroom units may not have access to their own outdoor spa, but they have unlimited access to the resort’s pool area,  Boulder Ridge Cove.  The “cove” has been given a charming “history” of its own by Walt Disney Imagineering.

Described by Executive Architect David Stofcik as the “heart of the resort,” the pool serves as the origin of Copper Creek’s story in addition to being at the center of it geographically. According to the tale, it is the quarry from which the stone that built the community was sourced. That quarry has now been repurposed as a luxury pool.

Just a few steps away from the water retreat of Boulder Ridge Cove lies Geyser Point, an open air bar and grill with a quick-service counter that offers a Pacific Northwest-inspired menu. Here you are treated to beautiful views of Bay Lake and the optimal vantage point to watch both the beloved Electrical Water Pageant and the “Happily Ever After” Firework Spectacular erupting over the Magic Kingdom.

We can expect that this addition to Disney’s Wilderness Lodge will only increase the demand for this resort.  Even just in previews, it is already evident that this segment of Disney Vacation Club will be among the most popular with guests and DVC Members alike. Well-appointed accommodations in a prime location and a charming story to boot will likely make the Copper Creek section of the lodge difficult to book without priority.

However, those that are able to secure reservations (especially those waterfront cabins) will find it well-worth any initial challenge as the units are guaranteed to please. I mean, personal outdoor built-in hot tubs… I rest my case.