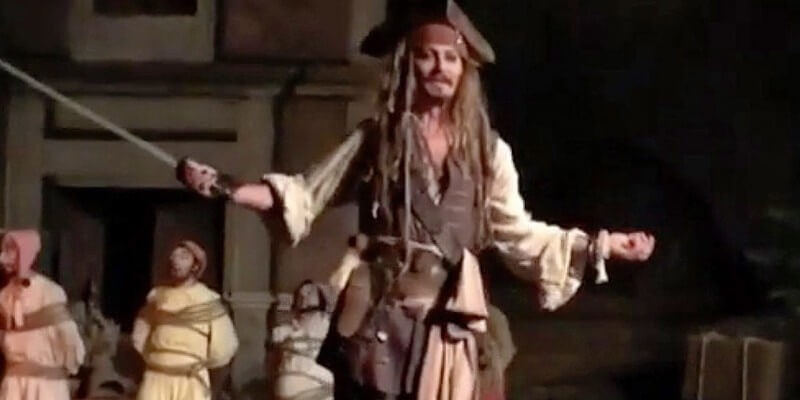 With the fifth “Pirates of the Caribbean” movie sailing into theaters soon, Disney pulled the ultimate surprise yesterday for unsuspecting theme park guests as Johnny Depp appeared inside and around the attraction that inspired the movie.

While the classic Pirates of the Caribbean ride has featured lifelike animatronics of Captain Jack Sparrow for several years, you can’t beat the real deal.

This of course is not the first time Depp has surprised fans as Jack Sparrow in person. He’s done it twice at the D23 Expo, down the street from Disneyland at the Anaheim Convention Center.

Rumors have swirled for years that Depp has made random appearances in costume in the parks – but no one has ever captured definitive proof until now.

Disney will no doubt release an official video of this happening soon, as they were filming in the attraction yesterday, but until then we have many more clips shared on social media by guests who were lucky enough to see Depp in person…

Johnny Depp Is filming on the pirates ride in Disney land!!!! Crazy!!!!!! pic.twitter.com/Klc1QyEKzR

You know those little Disney Myths like…Johnny Depp will dress up as Jack Sparrow and sit in the Pirates of the Caribbean Ride? Well… pic.twitter.com/oAyIIu1e56 Comments Off on VIDEO: Johnny Depp surprises Disneyland guests as Jack Sparrow inside Pirates of the Caribbean ride