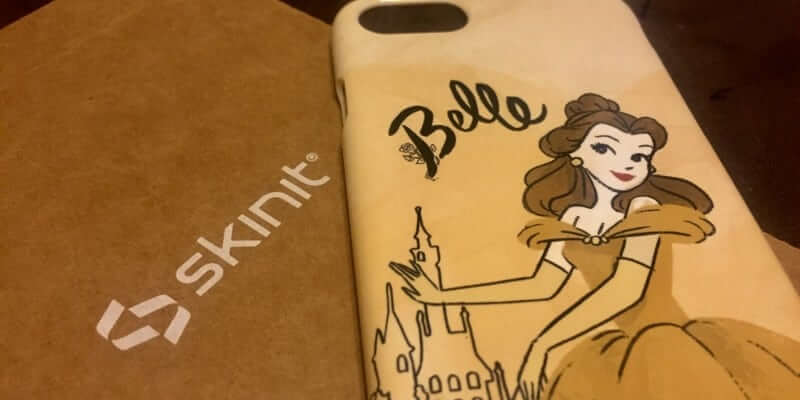 For Disney fans, expressing loyalty to our favorite brand is a way of life. If there is something we can personalize, we will often choose to personalize it with some reference to Mickey or one of the many branches in his kingdom. Disney recently partnered with Skinit, a company that creates covers for all kinds of devices, to produce an entire collection of Disney Princess designs for cases and skins.

The cases are made to accommodate iPhones, Galaxy phones and even a few other types of devices. Likewise, the skins cover a wide variety of devices such as: Being a Disney fan, I was anxious to get my hands on some of these phone cases. I have wanted much more than this provincial life for my most prized possession, so I chose a Belle design for myself. My daughter needed to have them all, so we picked out a design with all of the princesses for her. In short, the cases were what we expected, but I’ll break it down for you. Skinit’s website has made the process of picking out your selection as simple as it can be. I don’t know about you, but I have often spent hours online looking for a phone case design only to find that the one I settle on isn’t available for my particular phone. It can be infuriating. This will not happen with Skinit. The site allows you to shop by category rather than design (which means that you can look at all the designs available for your phone on the same page). With that being said, as best I could tell, all the designs were available for every type of phone. The selection of princess designs are good. I had an incredibly difficult time picking out a single phone case for myself because I wanted so many of them. On most of the designs, the artistic style mimics that of a fashion designer sketch, meaning not an incredible amount of detail but enough that you can pick up on distinct characteristics of the princess and her dress. Some of the designs have inspirational quotes incorporated into the design. Others have iconic landmarks or symbols connected with the story. I was absolutely torn between the Snow White, Rapunzel and Belle selections. Ultimately Belle won out, but I can’t say I don’t regret leaving the others behind. In addition to the cool designs, the cost of the case falls in the “good” category. The price for each case was $24.99, and this is entirely on par with other phone cases of this caliber. In fact, it is actually a bit less than other cases I have purchased on RedBubble in the past. So while this isn’t an incredible bargain, it isn’t an excessive expense either. The ease of snapping the case in place and getting it off again is one of the things that I appreciate most about my Skinit product. I have had phone cases in the past that make wrestling alligators look like child’s play. In anticipation of the struggle, would get tense every time I knew I had to take my case off for something. This one snaps on and off with little trouble, and it’s such a relief. For anyone concerned with the cut-outs, there is none here to be concerned with. I have had phone cases before that seem to be so concerned with protecting the phone, that they make accessing the ports and buttons rather difficult. It’s a huge frustration because if your phone is so protected that you can’t conveniently use it or charge it, there isn’t much point. In the end, you end up leaving the case off with your phone entirely unprotected just so you can use the darn thing. Once again, my Skinit case presents none of these problems. My greatest appreciation for it comes every night when I need to dock my phone to charge, and I don’t have to remove the case to do that–lazy chick that I am. The ease and convenience of the case brings us to the flip side of the coin. This case is not going to protect your phone in extreme circumstances. It is a plastic shell with no rubber barriers. There is also no cover over the phone screen, leaving it exposed and vulnerable to breakage. With all that being said, I have dropped this phone more than a few times already while using my case, and my phone hasn’t been damaged even the slightest. [My phone is in and out of my pocket all day long so it gets dropped a lot.] Also, back to those cut-outs…I noticed that the cover seems to partially cover the tiniest little part of the camera lens. At first I thought this would keep me from being able to use this case. I use the camera on my phone for everything from work to play, and blocking my camera just isn’t an option. However, the small edge of the case does not actually enter the lens’ field and there is no interference with it all. Nevertheless, I thought I’d mention it in case the look of it bothers some. Finally, while I do love the design I ordered for my case, I was a bit surprised when it arrived due some portions of it that look a little “pixelated.” My guess is that this is a stylistic choice in keeping with the idea of a “sketch,” but in some places it just makes the illustration look less defined. In all honesty, it is not a big deal to me. I still love the look of it, and this is the phone case I tend to choose for my phone on a daily basis at this point. I really like my Skinit case, and my daughter is enjoying hers as well. It’s a simple design with a simple function. There are no bells and whistles. It is primarily a way to say, “Hey! I really like this Disney Princess!” In that sense, it more than does its job, and I have to say that I recommend these designs for anyone seeking one more way to put off that Disney Princess vibe. It totally works. And if you catch this snazzy Belle phone wandering around the parks, be sure to say hi.

Comments Off on REVIEW: Disney Princess phone cases from Skinit now give you a way to express your Disney Side