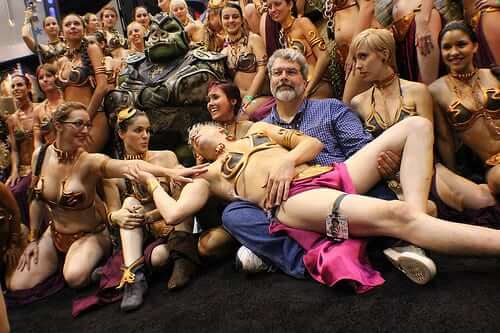 Not that long ago, attachment the “Star Wars” universe felt quite distant – and not in a “galaxy far, far away” sort of way.

After the much-maligned prequel trilogy had come and gone, there wasn’t yet a hint that Disney would buy Lucasfilm, let alone reinvigorate the franchise with a whole new trilogy and series of exciting spin-off films. It was a time with very little to look forward to – or to celebrate.

Yet, the Star Wars Celebration events continued every year, bouncing between countries and cities, each one allowing fans to share their enthusiasm for a franchise with a rapidly fading future.

While it was still fun and exciting for fans to get together, there was a lot of silliness to be found. “Star Wars” wasn’t being taken seriously.

Just look at the over-the-top artwork that was featured across giant banners throughout the Star Wars Celebration VI event for a perfect example of how “Star Wars” was rapidly losing respect: While walking through the event, it was pretty clear that without a clear future for “Star Wars,” its fandom had evolved into a mess of pop culture mash-ups and in-jokes. Entertaining? Sure. But it wasn’t exactly “Star Wars” anymore.

This was also a time of Slave Leias – everywhere. Amidst a sea of wild and wacky cosplay, Slave Leias often dominated the convention landscape, attracting a whole lot of eyeballs (and cameras) but in turn reducing “Star Wars” to something to ogle at rather than something to be proud of.

There was even a Slave Leia shooting gallery. Yes, attendees of Star Wars Celebration VI could literally shoot at scantily clad women – who were happy to stand there and be pelted by foam darts.

And this was a time when Disney’s biggest connection to “Star Wars” (aside from the always-popular Star Tours attraction) was the annual Star Wars Weekends event, which always culminated with the Hyperspace Hoopla and its absurdly entertaining Dance-Off with the Star Wars Stars:

The Dance-Off firmly split fans when it happened every year. Some loved its irreverent humor while others picked it apart for disgracing everything they loved about the “Star Wars” franchise.

But what nobody knew at the time, Disney was about to awaken a new era of “Star Wars” that would change everything.

In October 2012, Disney announced they had purchased Lucasfilm for $4.05 billion – and immediately also announced a new trilogy of films was on the way.

In one fell swoop, it was as if millions of voices cried out with unified excitement. “Star Wars” was coming back. Soon there would be something to celebrate once again.

At the next Star Wars Weekends, Walt Disney World held its final year of Hyperspace Hoopla, with one more over-the-top Dance-Off with the Star Wars Stars:

But it ended with a surprise, as Jedi Mickey danced his way onto the stage as if to say, “Don’t worry. Star Wars is in good hands now.”

Of course, some fans immediately worried that Jedi Mickey marked the beginning of a Disney-fied “Star Wars” – one that they wouldn’t be able to relate to or enjoy.

But with Kathleen Kennedy now at the helm of Lucasfilm, under the supervision of the Mouse, respect quickly became a priority for to push this franchise forward, as was seen at Star Wars Celebration Europe in 2013.

The tone had changed. Suddenly “Star Wars” was something to praise. Its characters were held up as role models. Its stories seen as timeless parables to learn from. From that moment forward, the silliness had ceased in favor of a shared excitement among “Star Wars” followers, who could now be proud to be fans.

At Walt Disney World, the Hyperspace Hoopla was replaced by a tasteful tribute to all things “Star Wars” at the end of each day:

And when Star Wars Celebration returned to the United States in 2015 in Anaheim, CA, the new era of “Star Wars” officially began.

“The Force Awakens” was unveiled in a big way, showing off a reunion of stars from the original trilogy together with the newcomers – the faces that will help tell new stories for fans young and old to come to enjoy.

“Rogue One” was revealed as the first spin-off film, which instantly catapulted the future of “Star Wars” far beyond three additional movies.

And in that same year at the D23 Expo, that future was announced to also include entire lands based on “Star Wars” would be built at Walt Disney World and Disneyland, much to the delight of Disney and “Star Wars” fans worldwide:

Tomorrow, Star Wars Celebration is returning to Orlando and there are no doubt many surprises in store.

When Orlando last saw a Star Wars Celebration event, it was before Disney had purchased Lucasfilm, before a new trilogy was announced, before “The Force Awakens” and “Rogue One” were released, and before Star Wars Land was anything more than the dreams of fans to one day truly step into the universe they have loved for so many years.

At 11am tomorrow morning, the 40th anniversary of “Star Wars” will be celebrated with stars from decades of the franchise’s history. The next morning, a peek at the next major film, “The Last Jedi,” will be revealed. And midday Saturday, it’s likely that the world will learn new details about Star Wars Land from Disney Parks.

Amidst all that will be an exciting array of panels, presentations, exhibits, and displays that come together under a mutually formed love of the “Star Wars” of the past and the “Star Wars” that is still to come.

Just compare that outrageously over-the-top poster from the last Orlando convention above to the beautiful, tasteful piece that represent this year’s event: “Star Wars” is once again something truly worth celebrating.

Be sure to follow along with Inside the Magic as we bring all four days of Star Wars Celebration excitement to you, including Friday night’s special Galactic Nights event at Walt Disney World!

Comments Off on Looking Back: How “Star Wars” has dramatically changed since the last Celebration Orlando event, replacing silliness with respect