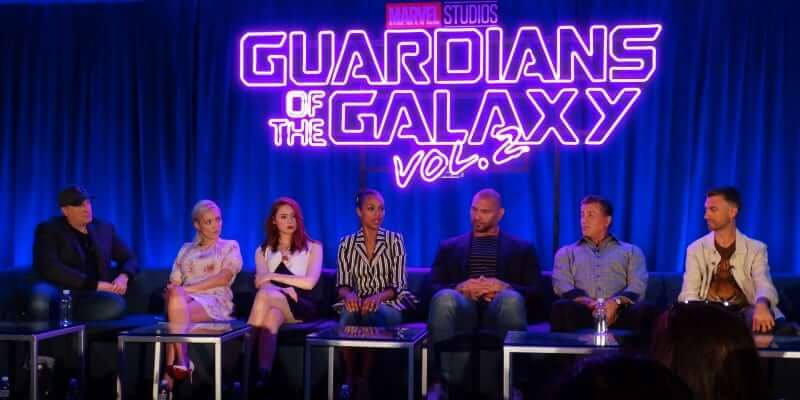 We’re just about a week and a half away from the release of Marvel‘s sequel “Guardians of the Galaxy Vol. 2”, and last week the project’s cast and creative team gathered in Beverly Hills, California this for a press conference about the making of the new film. (Be sure to read PART 1 of the press conference, which was posted on Friday.) The panel started with Sylvester Stallone (who plays the Marvel Comics character Starhawk) talking about the process of coming aboard the Marvel Cinematic Universe.

“Actually, it was pretty painless. It was interesting because I love [Marvel] films, but I haven’t ventured into the genre, so it was quite an experience. When I walked on the set, [I saw] robots and things, a woman who was seven feet tall, and everything else. I thought, ‘This is great. This is a great vacation. It’s better than being up a tree in Burma,’ you know what I mean?” he joked, referencing the time he spent making the “Rambo” films. Pom Klementieff (Mantis) was similarly enthusiastic about joining the Marvel Studios team. “I had such an amazing time. I had an incredible time with the cast and with the director. It was one of my best experiences ever, and I can’t wait to do it again.”

Karen Gillan (Nebula) and the rest of the actresses compared their endurance of the movie’s morning makeup procedures. “I feel like we’re pretty even on our makeup time. Four hours.” Zoe Saldana (Gamora) explained how she would help the hours pass while having her cosmetics applied.

“I talk my team to death. I don’t shut up from 2:30 in the morning until we’re on set and James says action, I’m just like, ‘Blah blah blah.’ I just keep talking, and I feel like that’s how I get time to go by. Because if not, I’ll just go crazy. There’s not much to do at 2:30 in the morning besides sleep. You can’t eat, you can’t really move around that much because they need your hands and your face, so you’re just on your phone and you talk.” “I get very drunk,” Gillan joked. “No, for me, actually, it’s sort of become part of my ritual of getting into character. It’s quite interesting, I did this rehearsal as Nebula one time not in makeup, and I just didn’t feel like her. It’s an imperative part of the process for me now. I literally get to wear her skin, which is the closest I can get to her.” Dave Bautista (Drax the Destroyer) seems to have had a somewhat easier time with the makup process. “I’m ashamed to even talk about it. It’s not even a labor at all, it’s about an hour and a half, and I literally just zone out.”

Gillan sang the praises of doing action scenes with her frequent scene partner Saldana. “It’s the greatest. I love working on all of that stuff with Zoe. It’s the best. We have such a good time.” “We do, because we’re very opposite to our characters,” Saldana agreed. “Karen is very feminine and goofy. And I look clumsy because these sets are dangerous, let’s be honest, the grounds are never flat and we’re on wires and everything. And I don’t think I’m babbling, but I never shut up. I’m either talking or laughing at something somebody’s saying.”

“But you’re an amazing fighter,” Gilan countered. “Zoe literally teaches me how to fight while we’re doing it. She’ll be like ‘Turn your head like that, you strangle someone like that, you’re gonna look cool.’ And I’m like, ‘Yes! Thank you.'” Sean Gunn, younger brother of the film’s director James Gunn, then spoke up about his dual contributions to the “Guardians” movies, in which he plays both Kraglin and the on-set Rocket Raccoon.

“It’s interesting, I play two roles in the movie. When you act, there’s both the input and the output. The input is the work you put into it and what you do on set, and then the output is what you see on screen. So for me the input is very similar for both characters, but the output is totally different, because it takes a whole team of people to make Rocket. I’m just one member of that team. But yeah, it’s interesting in this movie because Rocket and Kraglin have a few scenes that they’re in together. So juggling the two things was a very strange and challenging experience for me. But I love it. I love both characters and I’m really grateful to be a part of it.” Saldana added to Gunn’s recollections with high praise for the actor and how indispensable he is to the franchise.

“It’s amazing. I don’t think that people really understand what Sean does for the movie, the references and the intonation. He’s so limber as well, so he manages to shrink and curl up so he’s always Rocket’s size and he gives us all the passion and all the dynamic we need to have from Rocket, because Rocket is the sassiest character of the Guardians. I don’t think we would be able to respond to Rocket the same way if Sean wasn’t playing him. And I know that Sean serves as the perfect reference for Bradley [Cooper, the voice of Rocket]. I know for a fact that whatever you leave behind for Bradley is just what he needs to catch up on everything he’s missed when we’ve spent those four months shooting. Rocket is composed of two very important people, and Sean is the main ingredient.” Kevin Feige, president of Marvel Studios, was quick to corroborate Saldana’s acclaim, and confirm how invaluable Gunn has turned out to be.

“It’s not just for Bradley, it’s for the animators who are putting Rocket together. I can’t tell you how many times in visual effect reviews James will say, ‘Go back to the plate,’ which means the original portion of photography with Sean, to get the little mannerisms of his eyes and his mouth. I’m happy to talk about how great Sean Gunn is all day long. And in this movie Kraglin does a lot more. There are a few moments where Kraglin brings emotion, and really puts it over the top for me as I watch it. And Rocket has encountered other Marvel characters [in future movies] and I will tell you all the actors have had an amazing time with Sean as he brings Rocket to life and they can start acting off of him. It’s really impressive.” Stallone concluded the press conference by explaining what is so appealing to him about being part of the current Marvel movie phenomenon.

“Early on in my career I became fascinated with mythology. Joseph Campbell’s “Hero with a Thousand Faces,” and so on and so forth. When I started doing “Rambo,” [I came to understand] there’s an evolution that takes place. Every generation has to find itself, define its own heroes, define its own mythology. And [the MCU] is this generation’s– and maybe even the next generation’s– mythology. And when Kevin invited me on board I said, ‘This is interesting because I haven’t gone here. I’m kind of Earth-bound. I’m terrestrial. This is something that takes place in a whole other sphere where James and the Marvel people have created their own world, their own reality.”

“So I said, ‘Yeah, let me visit. Let me drop in here and see what’s up, where the future is going.’ And it was great. It got me out of the house [away] from my three daughters,” Stallone teased. “And that’s why I gave them my salary back.” Marvel’s “Guardians of the Galaxy” will be released into theaters nationwide on Friday, May 5th. Check back here at Inside the Magic early next week for PART 2 of the press conference.