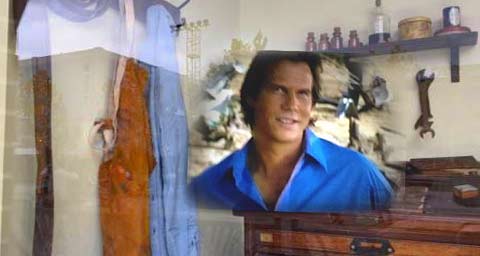 While Universal Orlando isn’t shy about bulldozing past attractions to make way for new ones, they are always excellent at including tributes to their theme parks’ past in each of their new additions.

Just as Diagon Alley paid tribute to Jaws, the new Race Through New York Starring Jimmy Fallon ride (that just soft opened today) has a tribute window of its own, and a rather timely one at that. Not only does this new “Jimmy Fallon” ride pay tribute to the beloved Twister attraction that it replaced, but also to the late actor Bill Paxton, who passed away just a few days ago.

Peeking inside this window, guests will see an homage to generations of news reporting. After all, this is a window of a facsimile of 30 Rockefeller Plaza, headquarters of NBC. The building’s history dates all the way back to the 1920s, where NBC was the first national radio network in the United States. But those looking a little more closely at the details within will find a few familiar elements.

A blue collared shirt hangs on a hook – a reference to the shirt famously worn by Bill Paxton in the videos formerly featured in the Twister attraction. The name “B. Paxton” can also be seen on a stapler on a desk. Lastly, an ad for “Twister Cola” is prominently posted on a bulletin board. Even as fads come and go, we’ll always easily remember Universal’s past with tributes like these. Look for them next time you’re at Universal Studios Florida.

Photos and reporting by JeniLynn Knopp.