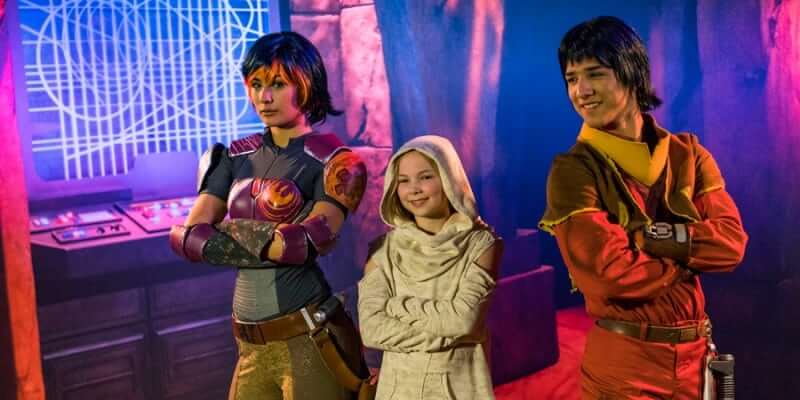 Last year, “Star Wars” Day at Sea hit big on Disney Cruise Line. The day-long celebration of all-things-Star-Wars was brought back again this year for select sailings through April, but this time there is even more to enjoy. Here is a look at the additions to an already popular event: “Summon the Force,” the incredible deck show, brings 40 years of “Star Wars” glory into one show that “wows.” The incredible score, written by John Williams, now includes some of the melodies from “Star Wars: The Force Awakens” and “Rogue One: A Star Wars Story.” New characters have also been brought onboard. Now guests can find Kylo Ren, Ezra and Sabine at this fun affair. Sabine, Ezra and Ahsoka Tano are greeting guests in an all-new location. And the Upper Deck’s Funnel Vision now features showings of “Star Wars Rebels.” Additionally, the “Jedi Training: Trials of the Temple” are now a part of the action as The Seventh Sister and Darth Vader continue their dueling on deck.

This year, some of the people that brought these films to life will be sharing their stories about being a part of that process. Hannah Gills, producer for Industrial Light & Magic; Pablo Hidalgo, creative executive for Lucasfilm Story Group and Jason McGatlin, executive producer for “Star Wars: The Force Awakens,” “Rogue One: A Star Wars Story” and “Star Wars: The Last Jedi” and others will now be a part of select sailings to give voyagers a behind-the-scenes look at this spellbinding saga.

New merchandise that is exclusive to Star Wars Day at Sea 2017 sailing is coming to Disney Cruise Line. Drink ware, apparel, pins and more will all be available, but only on these cruises.

Screenings of some of “Star Wars” most popular films will be held onboard. Passengers will be able to watch the original “Star Wars” films as well as “Rogue One: A Star Wars Story.”

It is an event that Star Wars and Disney fans alike won’t want to miss!