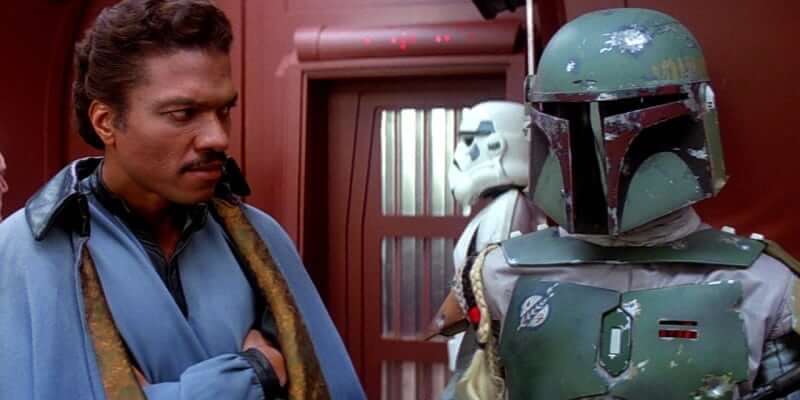 For one of the most iconic and enduring secondary characters in Star Wars history, he’s gotta be more than just a suit of cool-looking armor. Or does he? Let’s take a look at the design, development, and on-screen role of intergalactic bounty hunter Boba Fett.

Back in late 1977, when George Lucas finally sat down and started plotting out the sequel to his massive surprise hit “Star Wars”, the story began to call for a “Super Trooper”, an elite version of the Imperial Stormtroopers found in the first movie. Lucasfilm’s design team took some of concept artist Ralph McQuarrie’s early sketches for Darth Vader and called for them to be reworked into new designs for the Super Trooper costume.

As the plot of “The Empire Strikes Back” continued to evolve, Lucas chose to include a bounty hunter character who would track Han Solo and Princess Leia down to Cloud City above the planet Bespin, and the Super Trooper design was reworked to become Boba Fett. The final design of Fett’s famous armor is credited to special effects artist Joe Johnston, who later went on to direct the movies “The Rocketeer”, “Jurassic Park III”, and “Captain America: The First Avenger”.

Boba Fett’s first appearance in Star Wars media came with the notorious 1978 “Star Wars Holiday Special”, in which the bounty hunter debuted in the short animated segment near the middle of the infamously disastrous television event. Long-disowned and disregarded by Lucasfilm, the special only ever aired once and has never been made available on home video in any official capacity.

Finally, upon the release of “The Empire Strikes Back” in May of 1980, Fett made his first live-action appearance aboard Darth Vader’s Super Star Destroyer Executor. In the now-classic scene, Vader dispatches a group of assorted bounty hunters (including Dengar, IG-88, Bossk, 4-LOM, and Zuckuss) to find Han Solo’s ship the Millennium Falcon.

Of course, as fans know by heart, Han and friends had attached the Falcon to the rear of another Star Destroyer, with the intent of floating away once the ship dumped its garbage. And Boba Fett is the only one of the six bounty hunters to uncover that plan and follow the heroes to Bespin in his Firespray-class ship Slave I.

On Cloud City, Fett is present for some wheelings and dealings between Vader and the gambler Lando Carlissian. He then takes possession of the frozen Han Solo– encased in a solid carbonite block– and transports him to Jabba’s Palace on the planet Tatooine, where the item becomes the Hutt’s favorite throne room decoration.

Later, during the events of “Return of the Jedi”, Boba Fett can been seen hanging around the palace, and then attacks the escaping Luke Skywalker and friends aboard Jabba’s sail barge and skiffs over the Pit of Carkoon. Fett subsequently has a jetpack malfunction at the hands of Solo, and meets an untimely demise in the stomach of the almighty Sarlacc.

WATCH BOBA FETT IN “RETURN OF THE JEDI”:

Despite receiving very little overall screentime in the original Star Wars trilogy, Boba Fett became something of a cult figure during the period after the first three movies were released. His attractively eclectic armor, partnered with an array of built-in weapons and gadgets, made him one of the series’ most popular supporting roles.

Boba Fett also popped up on the short-lived “Star Wars: Droids” ABC animated series in 1985, in an episode entitled “A Race to the Finish”, drawn in the same style (and with the same alternate color scheme) as his appearance in the “Star Wars Holiday Special”.

Fett then enjoyed a robust afterlife in the voluminous Star Wars Expanded Universe that began in the early 1990s. In the Dark Horse comic book series “Star Wars: Dark Empire”, Fett was shown to have escaped the Sarlacc (who found him “indigestible”) and continued his pursuit of Han Solo and the Wookiee Chewbacca. He went on to have adventures in the novel series (now called Star Wars Legends) through to its end in 2012.

And who can forget Boba Fett’s now-canon origin story, told– perhaps a bit clumsily– by George Lucas himself in “Star Wars Episode II: Attack of the Clones”? In the official story, Boba is the clone of his father Jango Fett (also a bounty hunter), who gets beheaded during the movie’s climax by Jedi Master Mace Windu in a giant battle on the planet Geonosis.

WATCH THE DEATH OF JANGO FETT:

This new backstory effectively overrode Fett’s existing history that had been established in the EU– one that gave him the birth name of Jaster Mereel, a journeyman protector of the Madalorian planet Concord Dawn. The Mereel story has since been retconned into the Fett heritage by establishing Jaster as the mentor of Jango Fett, and having both Jango and Boba use Mereel’s name as an alias in more recent ancillary stories.

Boba Fett’s time as a youth between “Attack of the Clones” and the original trilogy was also expounded upon in the “Star Wars: Clone Wars” animated series on Cartoon Network.

So other than the armor and weapons, what makes Boba Fett so popular? Before the prequels, I would have said the mystery surrounding the character’s personal life or his exploits beyond the movies. But now that we know where Fett came from, what continues to make him appealing? The character, and the cult surrounding him, is still a bit of an enigma. And his popularity has endured for almost four decades. In fact, actor Jeremy Bulloch, who portrayed Fett under the helmet in “The Empire Strikes Back” and “Return of the Jedi” has made a comfortable living off convention appearances ever since his first appearance. Will Boba Fett make a reappearance in the current Star Wars canon after his apparent death in “Return of the Jedi”, or is the beloved character gone for good? His armor has already shown up in the new novels, having been claimed by another owner. It’s possible we’ll seen him battling old enemies in the “Young Han Solo” movie, due out in 2018, but is the notorious bounty hunter destined to ride again in the upcoming Episode VIII or IX? Only time will tell.

Comments Off on “Star Wars” Up-Close: The infamous Boba Fett