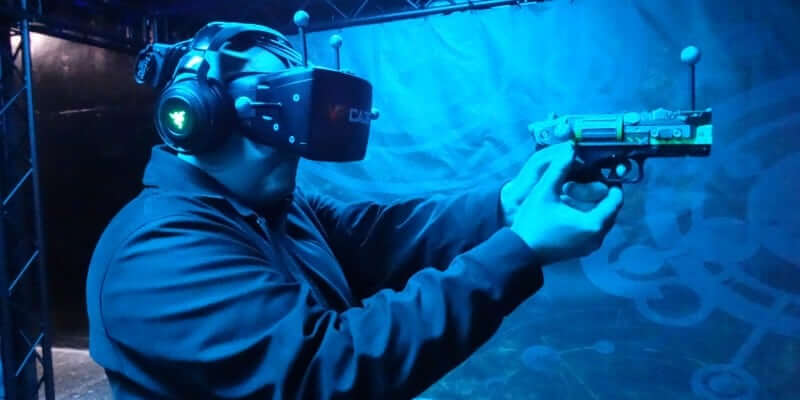 Two weeks ago Southern California’s Knott’s Berry Farm announced that it would be bringing the first permanent, free-roaming VR experience in an American theme park to its Boardwalk Arcade.

“Permanent” is the key word here for Knott’s “first” designation. Universal Orlando previously showcased free-roaming VR as part of The Repository – but that was a temporary installation for their Halloween Horror Nights event.

Technicalities aside, I recently had the opportunity to truly be among the first to test out the new game at Knott’s Berry Farm, called “VR Showdown in Ghost Town”.

I was definitely excited to give the new attraction a try – but more importantly, I left even more excited for the future of these kind of interactive games at theme parks and elsewhere. It helps a lot that “VR Showdown in Ghost Town” is tied in extensively with the history of Knott’s Berry Farm, dropping player into a futuristic version of Walter Knott’s famous roadside attraction, which has now become overrun with bloodthirsty cowboy robots.

The theming also incorporates a nod to the former Knott’s dark ride attraction Kingdom of the Dinosaurs, utilizing the character of Professor I.F. Wells (apparently now spelled Welles) as the springboard that launches you into the time-travel adventure. The pre-show area– which was not 100% complete at the time of my test-run– also contains many Easter Egg references to Knott’s past, as well as a cool animatronic robot arm and a video display that will catch players up on the background story of “VR Showdown in Ghost Town” before guests enter the arena. Once through the queue area, players are greeting by a long hallway of portals, given a briefing on what they can expect from the game and the general protocol of VR use, and then escorted into the individual chambers, known as “capture spaces”. Guests can place their belongings on a handy rack before being fitted for a pair of custom VRcade HMD goggles and an audio headset. Once inside virtual space, players are handed a color-coded gun that they will use throughout the experience. The game itself is a lot of fun, if a bit brief. Players start out on a “time-travel platform” where they can test out the hardware, firing at drones and getting their bearings before Professor Welles sends them into the future. I found the description of free-roaming to be a tiny bit misleading, as the actual play space isn’t much bigger than a large elevator, but you are free to walk, duck, and dodge projectiles within that space.

Play takes place in the center of Ghost Town, where you can look around in full 360-degree vision to take in replicas of many of Knott’s famous buildings like the Blacksmith Shop, the Water Tower, and the Calico Bank.

VR Showdown in Ghost Town is essentially a VR version of a video game shooter.

The objective is to shoot and destroy the army of evil robots that swarm around you– including three mini-bosses– before taking on a spider-like final boss robot. If you get hit by enemy plasma shot, you lose points, ultimately affecting your competitive score, although the game is designed to be played cooperatively. For those who are curious about the technical end of things, “VR Showdown in Ghost Town” was designed and developed by VRstudios for their custom hardware, which includes “incredibly accurate positional tracking sensors, a proprietary, wireless VR HMD, and a custom gun peripheral.” There are eight capture spaces measuring 20′ x 17′ (though the actual in-game play area was much smaller) and two users can play simultaneously in each space, with up to two spaces linked together, bringing the total number of players in each scenario up to four.

Overall – I enjoyed the game, though I feel it would take at least a half-dozen more attempts to feel like I was fully proficient at it.

I played three times last night, but two of those rounds were marred by technical glitches that I was assured would be ironed out by the time the game opens soon to the public. It’s fun, fast-paced, and there were times when I felt like I was actually in danger, which to me is the ultimate test of a virtual reality experience.

Knott Berry Farm’s “VR Showdown in Ghost Town” opens this April. Check back at Inside the Magic for a video preview coming next week. Special thanks to Jonathan Green of Inside Universal for being our photo model.