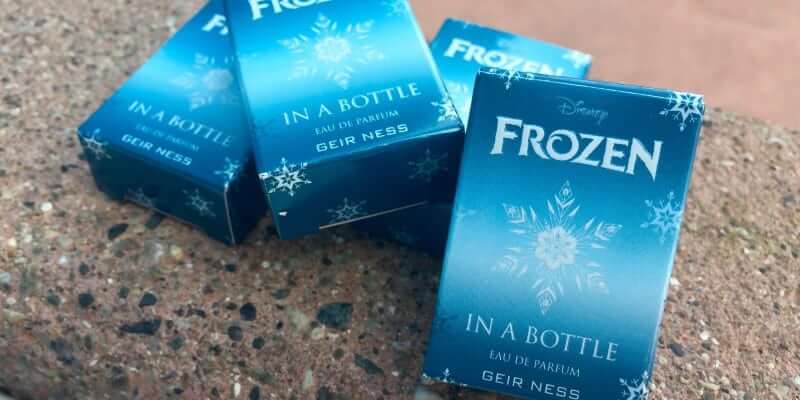 “Frozen” is now a fragrance. Norwegian fragrance designer Geir Ness has partnered with Disney to create this signature perfume, inspired by the popular animated film. Frozen in a Bottle (as the designer scent is called) is meant to be just that–a perfume that has bottled the essence of winter’s beauty.

But how can such a thing be captured as a scent? We had a chance to talk with Ness today to find out more behind the creation of Disney’s first signature fragrance. A very enthusiastic Ness explained, “The movie was phenomenal at capturing the winter beauty of its setting, inspired by the fjords of Norway. For inspiration, I sat alone in the Norwegian mountains, taking in the spectacular scenery, the crisp clean air, pure white snow, and glistening glaciers.”

The backdrop of the film was only partially what Ness attempted to recreate with his talent as a perfumer. He also sought to take the emotional undercurrent of the tale and translate that into an aroma. “It was important to me to not only capture the essence of the Norwegian mountains and fjords, but to reflect the arc of the film’s story,” Ness said. “Frozen in a Bottle starts fresh, clean and powerful like the movie and develops into a soft, light and intoxicating fragrance evoking the film’s heartwarming conclusion.”

It’s hard to deny Ness’ passion for his new product. His entire face lights up when he talks about the process he went through to pick the particular notes for this fragrance. And as a personal fan of the movie “Frozen,” this has been a project close to his heart. It’s also a process that has taken up the last two years of his life, but he wouldn’t change a thing. “Working with Disney has been such a dream,” Ness relayed. “First I created the fragrance, Laila, that they have been selling here at the Norway Pavilion….And when the movie came out–Frozen–they [Disney] asked me to create a scent that reflected the nature of the movie.” When asked if there would be any further collaboration with The Walt Disney Company to bring more signature fragrances to Disney, Ness responded, “I am talking with Disney. Maybe in the future I will have other fragrances coming out. I can’t say anything about it right now…but there could be a possibility for it.” Frozen in a Bottle makes its debut in the Norway Pavilion of Epcot today. It comes in two sizes. A 3.4 oz spray bottle will be priced at $70, and a 1.7 oz spray bottle will sell for $50. In the near future, the new fragrance will be available in the Tren-D store of Disney Springs, Disneyland Resort, on Disney Cruise Line ships, at Shop Disney, and at Geir Ness.