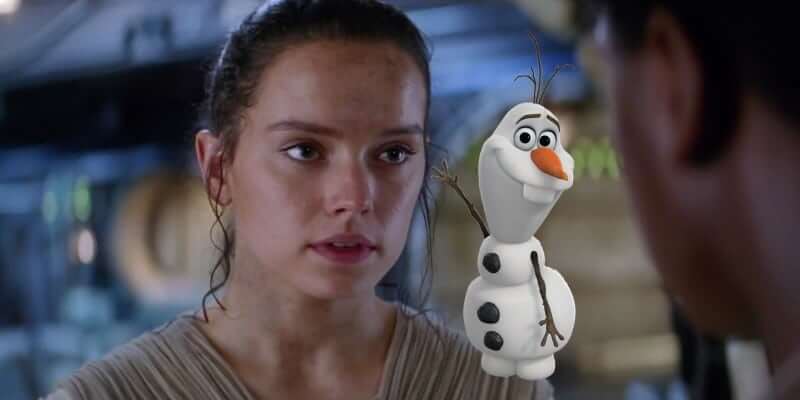 Look, we all want to know what’s going to happen in the next Star Wars movie. And many of us are going to have a hard time waiting until mid-December to find out. But when you’ve got an “in” with the lead actor from “Star Wars: The Last Jedi”, it’s probably pretty hard to pass up the opportunity to ask some questions.

On location for the upcoming remake of “Murder on the Orient Express”, costars Josh Gad (voice of Olaf from “Frozen”) and Daisy Ridley (Rey of “Star Wars: The Force Awakens” and two future entries in the Lucasfilm space opera series) had some downtime together between shots, and the former took it upon himself to start pestering the latter to give up some juicy Star Wars spoilers.

Of course it’s all obviously tongue-in-cheek and likely set up between the actors beforehand, but that doesn’t make it any less funny. Last week Gad came back for round two.

Then today on his Facebook account Josh Gad posted his latest video, this time enlisting legendary Oscar-winning actress Dame Judy Dench in his quest for knowledge about “The Last Jedi”.

This week Gad surrendered his questioning of Ms. Ridley over to a much larger group of celebrities, including Chris Prat (“Guardians of the Galaxy”), Bryce Dallas Howard (“Jurassic World”), and a surprise fellow Star Wars veteran at the end.

Of course like Rey herself, Ms. Ridley is incredibly strong-willed, and even the most prestigious of thespians cannot wrench information out of her.

Will Josh Gad continue his bothersome quest for “Star Wars: The Last Jedi” details? Will Daisy Ridley ever give in? Stay tuned to Inside the Magic for further updates and news about anything and everything Star Wars!

Comments Off on VIDEOS: Josh Gad will not stop pestering Daisy Ridley for “Star Wars: The Last Jedi” spoilers