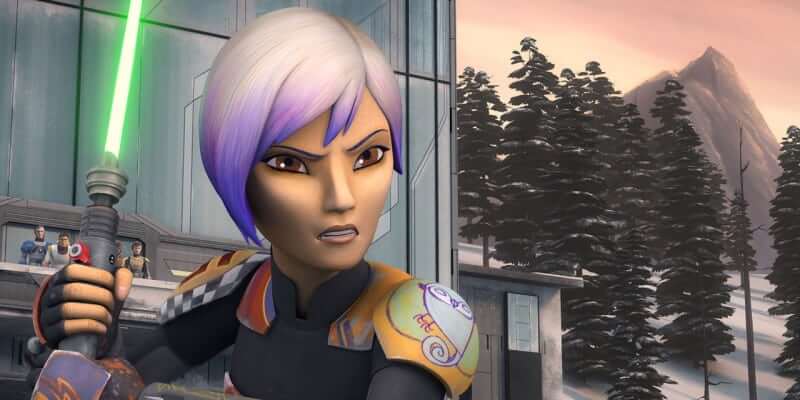 The mythology and character development of Disney XD’s animated series “Star Wars Rebels” grow richer with each season, and some of the supporting characters are finally starting to get their due.

This year the Mandalorian weapons expert and former bounty hunter Sabine Wren is the focal point of a major arc, having retrieved the legendary Darksaber from the planet Dathomir. Now set to become the new leader of Mandalore, Sabine must return home with her newfound weapon and skills that she has acquired via her training with the Jedi Knight Kanan Jarrus and his Padawan learner Ezra.

Today Disney XD released a new teaser for the next episode “Legacy of Mandalore”, along with some still images from the show’s return this weekend.

Interestingly, in two of the stills below, Sabine appears to be wielding Ezra’s green-bladed lightsaber instead of the Darksaber itself. We’ll have to tune in to watch the episode in order to find out why.

“Legacy of Mandalore” airs this Saturday, Feburary 18th as part of the ongoing “Star Wars Rebels” series on Disney XD. Comments Off on VIDEO: The Trials of the Darksaber continue in new teaser and images from “Star Wars Rebels”