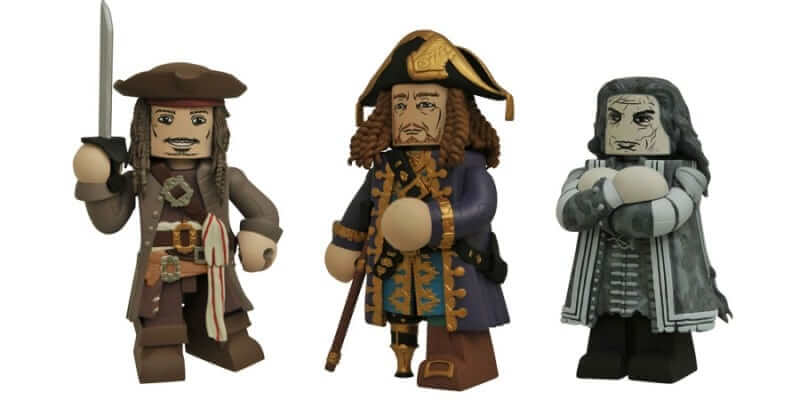 Lots of news coming out of Toy Fair 2017 today as all the major toy companies prepare for the big weekend. And now Diamond Select is getting in on the action with a long list of reveals detailing new collectibles from a number of popular franchises.

First up we’ve got a handful of Disney-themed items, including several new “The Nightmare Before Christmas” Minimates– Jack Skellington as the Pumpkin King, Sandy Claws, and Zero. Also from Disney are these new “Pirates of the Caribbean: Dead Men Tell No Tales” Minimates, featuring Captain Jack Sparrow, Barbossa, and Salazar from the new movie coming this summer. There’s also a two-pack assortment that includes Will Turner, Elizabeth Swann, and several yet-to-be-revealed mystery Minimates. From Marvel, Diamond Select will be offering an array of new PVC statues and dioramas depicting characters from the Avengers, the X-Men, Netflix’s “Defenders”, and more: check out Thor, Ironheart, Old Man Logan, Luke Cage, Punisher, Jean Grey, Iron Man, and Wolverine below. From The Muppets, we’ve got new action figures of Dr. Teeth and Zoot from the Electric Mayhem, Sam Eagle and Rizzo the Rat, and the Swedish Chef with an assortment of cooking accessories. As if that weren’t enough, Diamond Select also revealed new larger-scale Vinimates from “Back to the Future” and “Ghostbusters”, plus Minimates from “The Iron Giant”, “Watchmen”, and even “Predator”. That’s it from Diamond Select Toys’ big announcement today, but stay tuned to Inside the Magic for more from New York Toy Fair 2017!