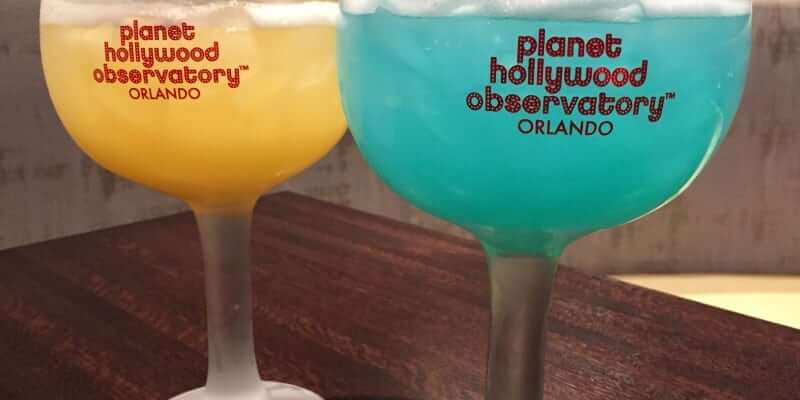 For more than a year we watched the outside structure slowly transform from garish globe to urbane observatory, but Planet Hollywood‘s metamorphosis is now complete. Located in the West Side section of Disney Springs, the eye-catching eatery is not easily missed. This is mostly due to the fact that the building now resembles an observatory–Disney’s clever way of keeping the “star” emphasis of Planet Hollywood while bringing the establishment in line with the legend of Disney Springs as a Florida town that evolved into a shopping and dining district. Planet Hollywood’s big pull has always been its collection of movie memorabilia; however, its conversion to “observatory” brought along an additional gimmick–the celebrity chef. Guy Fieri, the famous restauranteur of The Food Network, was brought in during the re-imagineering of Planet Hollywood to shape its menu and bring his brand of “Flavor Town” to Orlando. When the doors to Planet Hollywood Observatory finally opened a couple of weeks ago, I was excited about the chance to dine there. More than any other restaurant in Disney Springs, this restaurant had piqued my interest. I was completely on board with the new design I had seen in concept art–a seamless merging of glitz and sophistication–and I was curious to see how it would translate to actual brick and mortar. I was not disappointed, and yet I was not blown away either.

Walking into Planet Hollywood Observatory for the first time triggers a sense of excitement. You don’t anticipate a meal, you anticipate an experience, especially at night. The place glows with soft lighting but also maintains a high level of energy with the tunes of movie soundtracks driving a sense of fun. Of course, the collection of movie memorabilia remains throughout the restaurant (and that also tends to fascinate). I am a fan of the new streamlined look. If the goal is to blend in with the class and “culture” of Disney Springs’ new image, Planet Hollywood has succeeded. I would describe the place as having a “sophisticated slant” rather than full-blown environmental elegance, but this is actually what I appreciate about it. Being able to enjoy a good meal in a chic spot without having to be self-conscious about my lively kids or my beat-up Converse means that I have found a winning place. Another unique characteristic of the new Planet Hollywood Observatory is that you can have an entirely different dining experience depending on where you are seated. Indoors are three levels of tables. An entry-level at the base of a large telescopic structure has a few tables that are actually televisions, playing the music videos of movie soundtracks underneath your plates. Upper floors bring you eye level with the same videos being screened across the interior of the globe. Meanwhile, patio/balcony seating provides you with beautiful vistas of the “springs” for which the area is now known. And on ground level, the Stargazer Bar provides a more intimate and “adult” setting with its high-top tables and close quarters. Planet Hollywood has always been rich with visual goodies. Movie props and costumes are a staple of the brand. This continues to be the case with display cases lining walls and set pieces occupying shelves throughout the dining sphere. But the third level is where some of the coolest items are kept. Used for private events and overflow, this top floor has tables that work as huge “shadows boxes” for movie memorabilia. The one that has probably garnered the most attention is a “Ghostbusters” table that holds one of the newspapers from the film as well as the license plate of the Ecto-1. In addition to the vibe of the place, the service is on point. I have dined at Planet Hollywood Observatory twice now, and both times I was met with the friendliness from beginning to end. The greeters, the seaters, the servers, and the management–all were attentive, accommodating and made me feel like my satisfaction was their top priority. My hat is tipped to the staff trainers because they have done their job, and they have done it well.

Staffing and ambiance aside, often a successful dining experience comes down to the food, so let’s discuss. The portions are massive. If they are trying to serve up vittles that reflect Hollywood’s “larger than life” mentality, here is another area where they have scored. It doesn’t matter if it is the cocktails, the entrees, or the desserts, it all looks like they thought you were dining with Godzilla. In fact, if you leave Planet Hollywood Observatory still hungry, you have done something wrong–very, very wrong. Above all else, the “stars” of this place are on the dessert menu. I will even go as far as saying that if you go to Planet Hollywood Observatory for no other reason, you should go for the sugary concoctions that come out of there.

One of the things that Planet Hollywood Observatory offers is a selection of Supernova Shakes–milkshakes that send you into a diabetic coma just by looking at them. Seemingly created to compete with the Toothsome Chocolate Emporium’s outlandish milkshake menu, these Supernova Shakes pop with color and candy in such a way that you aren’t quite sure how to approach the task of consumption. Once you’ve devised a strategy, though, it’s on. The clear winner in the lineup of Supernovas is the Cosmic Cotton Candy shake. It is basically liquid cotton candy topped with actual cotton candy, whipped cream, sprinkles, and a massive lollipop. I have never had anything like this before in my life, and it is difficult to capture in words what happened when I did. This was not a simple after-dinner treat. What I had when that shake was served might be more accurately described as a “relationship”– and possibly a sinful one at that. At some point, I will revisit solely to experience that intoxicating sugar high again because I am not about to walk away from my love affair with this beauty–and this is coming from someone who is lukewarm about cotton candy.

I know that I just praised the design of this restaurant, but I would be lying if I said that a part of me didn’t miss the gaudy presentation of Planet Hollywood’s previous incarnation. One of the restaurant’s charms has always been its brash displays with Herbie car, Rocketeer, and other oddities hanging from the ceiling of the globe, so it is hard to not feel a bit of a loss. Rather than being the main attraction, movie memorabilia now seems to be relegated to a side ring position where its loud act has been muted. It’s not a bad thing. It’s just something different; nevertheless, I can’t help but feel a slight ping in my heart as Planet Hollywood has become less “Rooms to Go” and become more “West Elm”–growing pains, I suppose. In case you missed the part where we mentioned Guy Fieri shaped this menu, we need to review this point for health reasons. Dining at Planet Hollywood Observatory is not for the “faint of the colon.” Depending on what you order, the gastrointestinal experience can be a rough ride for hours beyond your meal. Known for his outrageous culinary concoctions, Guy Fieri specializes in combining every health-challenging food into dishes that confuse the mind and body. Whereas the atmosphere of Planet Hollywood Observatory has been toned down, the menu has been ramped up. Items like the Bacon Macaroni and Cheeseburger and L.A. Lasagna (deep-fried lasagna) need to be approached with caution. If your stomach is sensitive, please heed my warning. If you don’t, heartburn and constipation (or its evil antithesis) may be the company you keep for the rest of the night. If you have intestines of steel, though, you may have found your bliss. Dishes that seem to particularly pop flavor-wise are the World Famous Chicken Crunch, Texas Tostados, and the Six Cheese Chicken Macaroni & Cheese due to dipping sauces, cheese, and a sweet fried batter. [These things really should be served with napkins that have a liability disclaimer in the fine print.] There are healthy options to choose from for those who can’t roll with the colon crapshoot of fried chicken and six-cheese macaroni dishes. And the truth is that the salads received rave reviews from the people eating them next to me. In fact, the Spinach Salad with strawberries, walnuts, and roasted chicken looked particularly appetizing, but this is a choice you will have to deliberately make at Planet Hollywood. In general, the fare is over-the-top and seems a bit like a physical challenge. In addition to the food potentially shocking your system, the check can be a bit shocking as well. Perhaps it is due to the portion size, or maybe it is about the excessive ingredients. Whatever the case may be, expect this bill to hit with a big bang in relation to the cost of burgers and fries at Fuddruckers or Friday’s.

In terms of service and fun, Planet Hollywood Observatory is still a great choice for families. The atmosphere is energetic and visually stimulates in spite of its softened makeover. The staff is really personable too and leaves an impression that stays with you. I feel safe in saying that those who like to dine for atmosphere will find this one to be an amusing and pleasant experience. My opinion shifts a degree, though, for those that only concern themselves with the food. The menu is a bit “hit or miss” in this regard. Some items seem to be on target. Others seem to be off the mark and cause havoc on the way out, and the price of it all leaves a bitter taste to boot. When I left Planet Hollywood Observatory, I questioned whether I’d be back. Ultimately, I had to admit that I would. It really is a unique place to dine with friends and family, and it is an experience that I’ll likely want to share with others in the future. While it may not be a bargain in terms of Disney Springs dining, it remains a solid choice if your expectations are in line with what the restaurant actually delivers. Also, Supernova Shakes.

Cosmic Cotton Candy, we will meet again one day. Until then, you will haunt my dreams.