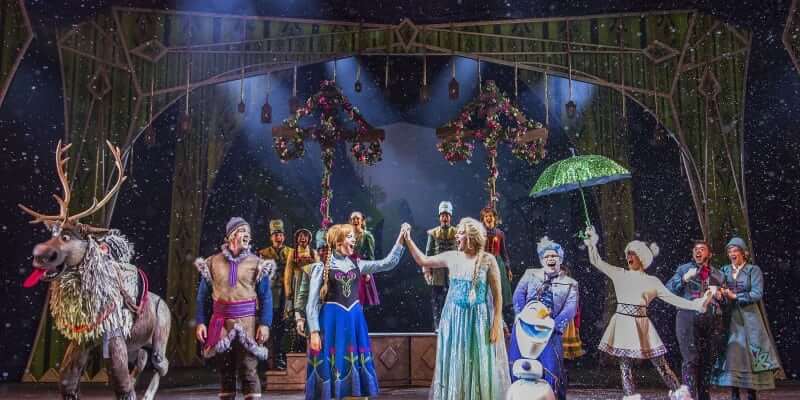 I didn’t think it was possible. With Ana and Elsa being featured in nearly every Disney Park, over thirty-five covers of “Let It Go,” and Olaf becoming a household name across the globe, I thought my heart had frozen when it came to “Frozen.” I mean, like most moms, this movie was something I ate, slept, and drew breath from for three years. In truth, I assumed some time ago that this fairytale was spent. I was wrong–so very, very wrong.

Disney Cruise Line just debuted their new theatrical presentation, “Frozen, A Musical Spectacular,” on the Disney Wonder. The choice of ship couldn’t have been any more appropriate because after I was entertained, awed and became downright emotional, I was left wondering how this production was able to melt me.

WATCH HIGHLIGHTS FROM THE SHOW:

Based off of the number-one animated film of all time, “Frozen, A Musical Spectacular” tells the story of two sisters who must find a way to save each other and their inherited kingdom with inner strength and the true love that is sisterhood. We all know how it goes, and yet Disney has found a way to re-invent its delivery through puppetry, moving sets, modern technology, and transformative costumes, making it a new experience for even the most icy veterans. This stage production is driven by the unforgettable music and lyrics of the “Frozen” film score. However, it is the impressive use of Michael Curry’s puppetry designs and Tony Award-winning Paloma Young’s costume creations that steal this show. Enhanced with sets drafted by Jason Sherwood, projection design by Aaron Rhyne, and lighting by Rui Rita, many scenes in this show come together in such a way that I’m certain we will see them repeated in like on Broadway at some point. This is never more obvious than during Elsa’s transformative display during the number “Let it Go.” As much as this song has been over-played, I should have been snoozing as soon as those first piano notes trickled out of the speakers. Instead, I was upright and fully attentive as scenery moved, projections rose, and a cold fog covered the stage to create an ice palace fit for a queen. Nevertheless, it was the transformation of Elsa, herself, that made my jaw drop. Exactly as she does in the film, one quick movement of the arm seems to magically change the timid princess into the confident queen not just in manner but also in costume. Right before your eyes, her attire is changed from head to toe in a split second. To be honest, I still can’t tell you how it is done; however, I can tell you that because it is timed alongside the song’s first climax, the visual metamorphosis is powerful and emotional. It would be nearly criminal of me to not mention the puppetry genius and flawless performance given by Olaf’s character. Wrapped in a puppet mechanism that requires an awkward coordination of feet, hands, and voice, the performer aboard the Disney Wonder has managed to make this lovable snowman REAL. And by real, I mean “the cartoon character has jumped out of the movie, become 3D, and is dancing around on stage in a way that makes me cry tears of laughter” real. Out of the difficult process of puppeteering comes the most beautiful and fluid movement you could ever imagine for a snowman, AND I am convinced that Olaf’s puppeteer must be made from Josh Gad’s DNA. There is no other explanation for his impeccable imitation of the character portrayed by the famous actor. For those thinking of taking a Disney cruise, it’s possible that you should select an itinerary on the Wonder just so that you have a chance to experience this amazing production. It is so well done that I have asked myself multiple times, “Why don’t we have something like this in the parks?” It’s a valid question; however, while we are waiting for the answer, get thee on this ship so that you do not miss out on “Frozen, A Musical Spectacular.” It’s worth melting for.