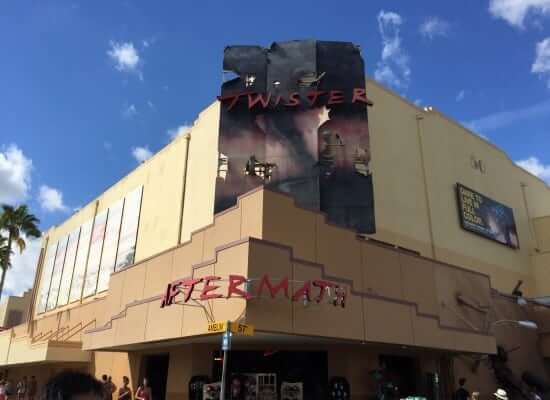 As a tribute to actor Bill Paxton, who recently passed away, ITM presents an attraction profile of the attraction “Twister. . .Ride it Out.” These special effects experience opened in May of 1998–an opening that was delayed by two months out of respect to those who suffered due to actual tragic tornado disasters in Central Florida at the time.  Located in the New York area of Universal Studios Florida and built on the same spot as the recently (1996) closed “Ghostbusters Spooktacular,” the attraction featured a three-part experience and the “AFTERMATH” gift shop. Designed to resemble scenes from the 1996 movie, “Twister,” there were four stages to the show. Guests would enter the queue as if wandering through the town of Wakita, OK while watching screens depicting various tornadoes.  Once all entered, a scene from the movie was shown, followed by actors Helen Hunt and Bill Paxton discussing their experiences in filming “Twister.” Proceeding, for stage two, guests would walk through the kitchen and living room, noticing a car crashed through the roof of a demolished home from the film that belonged to Aunt Meg. Paxton and Hunt would continue to narrate what was happening just as tornado warnings began blaring on the TV sets that appeared to have been effortlessly tossed about the room by a cyclone and as the wind began to stream through the devastated home. Into (or onto) the final stage of the adventure, the guest discovered an outdoor view of the gas station and hamburger shop in the foreground. In the background stood a drive-in theater screen that featured the horror film “People Under the Stairs.” Beyond that still were looming, ominous dark clouds.  Lightning flashed and a tornado formed in the distance, edging closer. As the massive storm devoured the drive-in screen, all hell broke loose with a cow flying by, caught in the whirlwind. The gas pumps erupted into flames from the spark of a flying truck. The roof overhead collapsed as the scene ended.  A final word from Bill Paxton and the show was over. The experience, especially when viewed for the first time, was a quick-paced descent into disaster with an actual funnel cloud forming on the stage.  This adventure continued daily until the attraction closed, seventeen years after it opened, in November of 2015 (making way for “Race Through New York Starring Jimmy Fallon”). The realism of “Twister. . .Ride it Out” can be credited to Universal’s creative team working closely with weather experts in fine-tuning the storm’s audio and force. “Twister. . . Ride it Out” did not have ride vehicles. Instead, it was a weather simulator experience that relied on the buildup of the preshow for added anticipation.  And as someone who has experienced a tornado as a child in South Florida, I can attest to the fact that the depiction was pretty accurate despite some of the over-the-top embellishments like a flying cow and exploding gas station. Were you one of the thousands who “rode it out?” Please give us your weather report in the comments below.