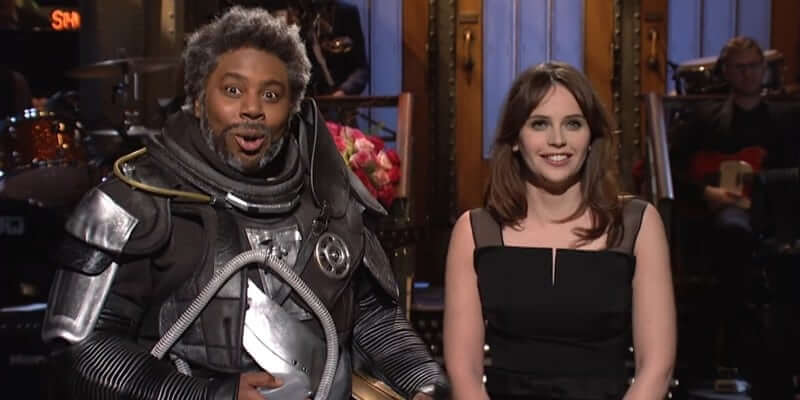 Since both franchises have been around for roughly the same amount of time, NBC’s sketch-comedy institution “Saturday Night Live” has had a long history of parodying Star Wars.

This past weekend’s guest host Felicity Jones (lead actor in December’s “Rogue One: A Star Wars Story”) brought with her a whole new opportunity to poke fun at everyone’s favorite epic space opera. In her opening monologue, Jones (who played Rebel recruit Jyn Erso in the movie) reunited with her co-star Saw Gerrera– played in the sketch by SNL regular Kenan Thompson. And then, in a pleasant surprise appearance, former cast member and “30 Rock” creator Tina Fey showed up in Princess Leia hologram form.

During the episode Felicity also trotted our her best Disney Princess impression, in a sketch skewering Hollywood’s (and men’s in general) intolerance of even the smallest amount of weight gain from the fairer sex.

WATCH “THE PRINCESS AND THE CURSE”:

Did you enjoy Felicity Jones’s guest host appearance on Saturday Night Live? Let us know in the comments below!