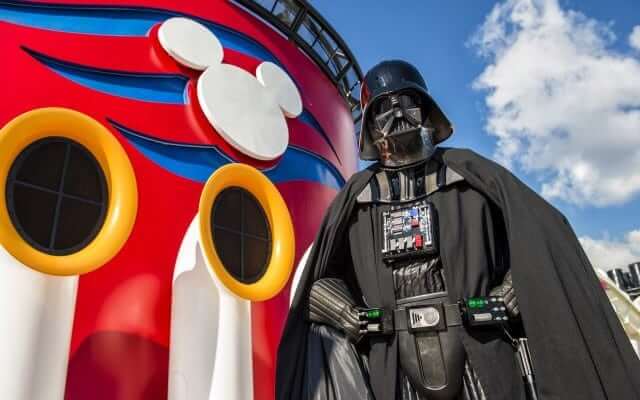 “The Force is stronger than ever onboard the Disney Fantasy, and we are excited to bring back Star Wars Day at Sea in 2018,” said Karl Holz, president of Disney Cruise Line.

The event features a full day of Star Wars celebrations including a deck party with a fireworks display, encounters with the galaxy’s most formidable and heroic characters, Star Wars-themed family and youth activities, unique food and beverage offerings and special merchandise.

Throughout the day, guests enjoy immersive entertainment and activities that are all a part of the galactic adventure… Characters from across the Star Wars galaxy are onboard for interactions and photos.
Guests are encouraged to bring costumes for a special gathering in the atrium lobby.
Guests indulge in the Star Wars films and television series, including all the films in the Star Wars saga, Star Wars Rebels and the latest installment in the new standalone series “Rogue One: A Star Wars Story.”
Specialty Star Wars-themed beverages, snacks, dinner menu items and desserts please the palates of everyone from Padawans to Rebel pilots to Tusken Raiders. Learn the Ways of the Jedi

In “Jedi Training: Trials of the Temple,” Force-sensitive children learn the ways of the Jedi and use their new-found skills in a final face-off with Darth Vader and the Seventh Sister.
Star Wars-themed arts and crafts, games and activities are offered throughout the day in all youth spaces for younglings to explore their powers.
Kids and families test their knowledge during Star Wars trivia games.