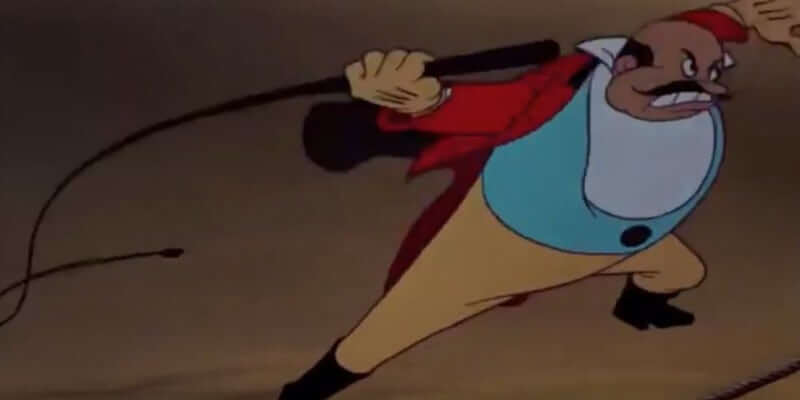 Adorned in bright red tailcoat, tall top hat and handlebar mustache, “The Ringmaster” was the featured “villain” in the 1941 Walt Disney feature length animated movie “Dumbo.”  He was not given a formal name in the film and was known as only the Ringmaster or The Boss. This loud and often obnoxious individual was charged with making sure things ran well the travelling circus.  This he did, bullwhip in hand, with a stern and head-strong demeanor.  From punishing Dumbo’s mother after she erupted in anger protecting little Dumbo from persistent taunting to forcing Dumbo into the clown core after a performance mishap (Dumbo tripping over his large ears) resulted in the show devolving into chaos and panic as crowds rushed to evacuate the crashing circus tent.

Though billed as a villain, the Ringmaster – though sometimes cruel and demanding, could also be viewed by some as more of an minor antagonist (whose methods were sometimes less than endearing).  This view is probably because by the end of the story, he appears to have redeemed himself as Dumbo has been promoted to the star attraction. It might be that this character earned his true villain card several years after Walt released his fourth feature (“Dumbo”).  It was not until his appearances in the 1999 PC video game “Disney’s Villains’ Revenge” that true colors are revealed. Here our taskmaster is given a much darker looking environment from with to announce the acts (as voiced by Corey Burton). At first, his villainous acts are only alluded to, as the bad guys have taken over the stories (because Jiminy Cricket removed the happy endings) – in this case forcing Dumbo to again perform is tower diving act (without the ability to fly) in front of an audience of assembled villains.  It’s not until later in the game that we learn of the Ringmaster’s true treachery: he’s stolen the tale’s happy ending page so that the story cannot be restored! Off Screen, Disney villain fans can hear the big top boss in California and Paris.  His voice (as performed by Ray Templin) is heard as the attraction comes to a stop at as he is part of the Casey Jr. Circus Train attraction at Disneyland in Anaheim, California.  A glimpse of the Ringmaster can also be seen in signs as part the queue for the same attraction in Disneyland Paris.

Of Note:  A live action version of the classic cartoon is in development by Disney.  Tim Burton is slated to direct the feature which will be produced by Justin Springer and Ehren Kruger (who is also working on the script).  According to a recent article (1/11/17) in Variety, Will Smith is said to be early discussion for a role in the film.  “If a deal closes, Smith would play the father of the children who develop a friendship with the lovable elephant after seeing him at the circus. Insiders also indicate that Tom Hanks has been offered a role as the villain.”   –”Variety”